India’s share in global sugar production in 2022 is forecast at 15 per cent at around 32 million tonnes. 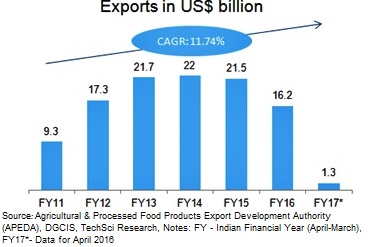 Food processing and its segments 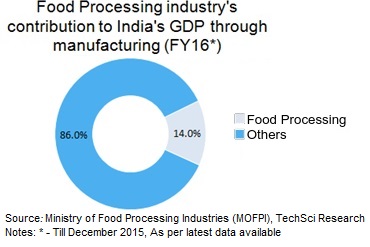 The Indian food industry is poised for huge growth, increasing its contribution to world food trade every year. In India, the food sector has emerged as a high-growth and high-profit sector due to its immense potential for value addition, particularly within the food processing industry.

Accounting for about 32 per cent of the country’s total food market, The Government of India has been instrumental in the growth and development of the food processing industry. The government through the Ministry of Food Processing Industries (MoFPI) is making all efforts to encourage investments in the business. It has approved proposals for joint ventures (JV), foreign collaborations, industrial licenses, and 100 per cent export oriented units.

The Indian food and grocery market is the world’s sixth largest, with retail contributing 70 per cent of the sales. The Indian food processing industry accounts for 32 per cent of the country’s total food market, one of the largest industries in India and is ranked fifth in terms of production, consumption, export and expected growth. It contributes around 8.80 and 8.39 per cent of Gross Value Added (GVA) in Manufacturing and Agriculture respectively, 13 per cent of India’s exports and six per cent of total industrial investment. The Indian gourmet food market is currently valued at US$ 1.3 billion and is growing at a Compound Annual Growth Rate (CAGR) of 20 per cent. India's organic food market is expected to increase by three times by 2020#.

The online food ordering business in India is in its nascent stage, but witnessing exponential growth. With online food delivery players like FoodPanda, Zomato, TinyOwl and Swiggy building scale through partnerships, the organised food business has a huge potential and a promising future. The online food delivery industry grew at 150 per cent year-on-year with an estimated Gross Merchandise Value (GMV) of US$ 300 million in 2016.

According to the data provided by the Department of Industrial Policies and Promotion (DIPP), the food processing sector in India has received around US$ 7.54 billion worth of Foreign Direct Investment (FDI) during the period April 2000-March 2017. The Confederation of Indian Industry (CII) estimates that the food processing sectors have the potential to attract as much as US$ 33 billion of investment over the next 10 years and also to generate employment of nine million person-days.

Some of the major investments in this sector in the recent past are:

Some of the major initiatives taken by the Government of India to improve the food processing sector in India are as follows:

Note: # - According to a joint study by the Associated Chambers of Commerce and Industry of India (ASSOCHAM) and TechSci Research

The Rise of India’s Drone Industry An airborne drone is a device th...

How India will build social media for the world

With 467 million users, India is one of the largest markets for social medi...