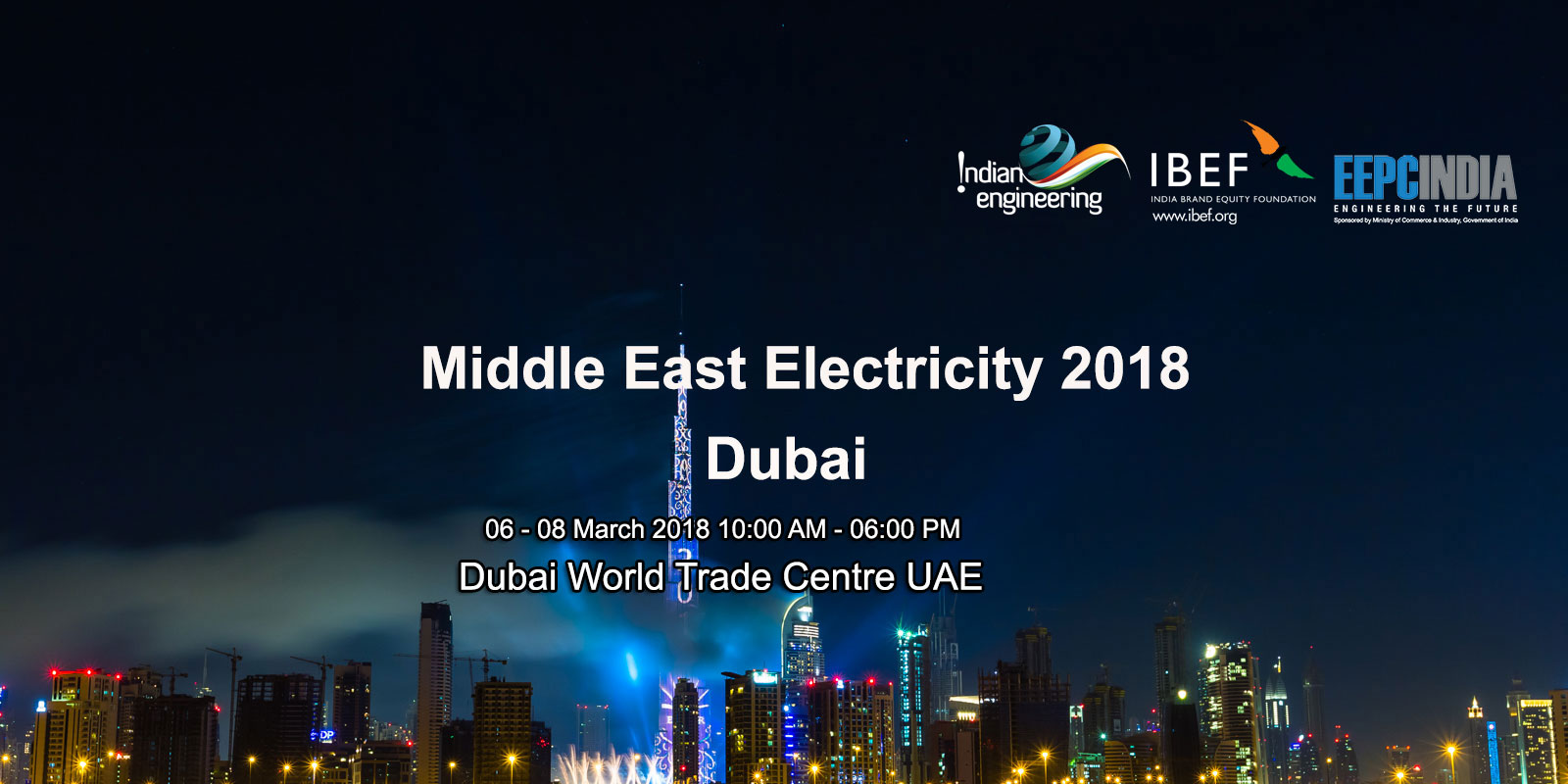 With EEPC India leading the India delegation of over 50 companies, IBEF will showcase the strengths in India’s electricity equipment & products industry at Middle East Electricity 2018.

Set up in 1955, EEPC India now has a membership base of over 13,000 out of whom 60% are SMEs.EEPC India organizes a large number of promotional activities such as buyer-seller meets (BSM) – both in India and abroad, overseas trade fairs/exhibitions, and India pavilion/information booths in selected overseas exhibitions to demonstrate the capabilities of Indian engineering industry and to provide the overseas buyers with true value as propagated by Brand India.

India Engineering Exhibition (INDEE) is EEPC India’s own brand and is one of the largest expositions of engineering in the world. This has been happening for the last few decades and is established as the largest and most important showcase for Indian engineering.EEPC India facilitates sourcing from India and boosts the SMEs to raise their standard at par with the international best practices. It also encourages the SMEs to integrate their business to the global value chain. To encourage building global partnerships with India, EEPC India organizes International Engineering Sourcing Show (IESS), the largest display of engineering products and services every year. This is recognized as the only sourcing event in India – showcasing the latest technologies and a preferred meeting place for global buyers & sellers. This show is also important to encourage foreign investments in line with the newly initiated “Make in India” campaign, by Government of India.Extending its regular agenda, EEPC India publishes several reports/studies to make the members aware about the international trends and opportunities in order to enhance their global footprints. Keeping ‘Engineering the Future’ as the motto, EEPC India serves as the reference point for the Indian engineering industry and the international business community in its efforts towards establishing India as a major engineering hub in the future.

This sector in India is in a transition phase as the consciousness as well as demand for Green Energy has been increasing at a rapid speed on the back of increasing cost of conventional power coupled with alarming level of pollution. For the first time in 2016-17, net capacity addition in the renewable energy (at 11.0 GW) exceeded that of the conventional power (at 10.3 GW), which is really a commendable achievement.

Progress in renewable energy during the last three years

Remarkable progress has been achieved in the renewable energy space during recent years driven by government initiatives and increase in awareness on 'green energy'. Share of renewable in total power generation has increased to 18.2% from 14.7% just a year ago. Significant increase in capacity addition has been witnessed along with noticeable decline in prices.

The Government of India last year introduced a competitive bidding process for wind power projects, along the lines of solar. In the 1,500 MW of projects that have been tendered out, the wind power tariff has fallen to Rs 2.34 per unit. The lowest tariff in solar stands at Rs 2.44 per unit.1

Under the Paris Climate Change accord, India has committed itself to building projects with a combined capacity of 175 GW renewable energy by 2022. This includes 60 GW from wind power, 100 GW from solar power, 10 GW from biomass power and 5 GW from small hydro power. This targeted capacity expansion at 175 GW by 2022 is by far the largest Renewable energy Expansion programme of the world.

The Indian Electrical equipment industry can broadly be categorized into two prominent segments. One is the Generation Equipment that includes boilers, turbines and generators, while the other is called Transmission & Distribution (T&D) and allied equipment consisting of products like transformers, cables, transmission lines, switchgears, capacitors, energy meters, instrument transformers, surge arrestors, stamping and lamination, insulators, insulating material, industrial electronics, indicating instruments, winding wires, etc. The T&D equipment sector accounts for 85% of the industry whereas the share of generation equipment sector is 15%.

The industry is diversified and matured with a strong manufacturing base as well as a robust supply chain. The market size for electrical equipments is more than US$25 billion. At present, the electrical equipments sector contributes 8% in total manufacturing production is terms of value and 1.3% in India’s GDP. The industry has been developing over the years with presence of major foreign players, either directly or through technical collaborations with Indian manufacturers that has made the industry capable of offering state-of-art technology in most sub-sectors at par with global standards.

Basically, the electrical equipment industry caters to the Power sector. More than 95% of the equipment successfully in operation in the Indian power sectors has been produced, installed and commissioned by the Indian electrical industry. Further, most of the products required for industrial, commercial and domestic sectors are also made by this industry.

In order for the domestic industry to be globally competitive, Indian industry needs support from the government in many ways. Some of them are suggested below:

Exports from this sector witnessed a decent growth over the last ten years or so. Exports of electrical machinery recorded a CAGR of 6.63% during the last ten completed fiscal ended 2016-17 and while the figures for the last five years has been taken into consideration, the CAGR went up to 7.7%, reflecting a better performance in recent years. India's top export destinations for these products are United States of America, United Arab Emirates, Germany, United Kingdom, Nigeria, Saudi Arabia, Australia, Brazil, Canada and France. Highest exported products from this sector include Switchgear and Controlgear, Transformers & Parts, Industrial Electronics, Cables, Transmission Line Towers, Conductors, Rotating Machines (Motors, AC Generators, Generating Sets) & Parts. 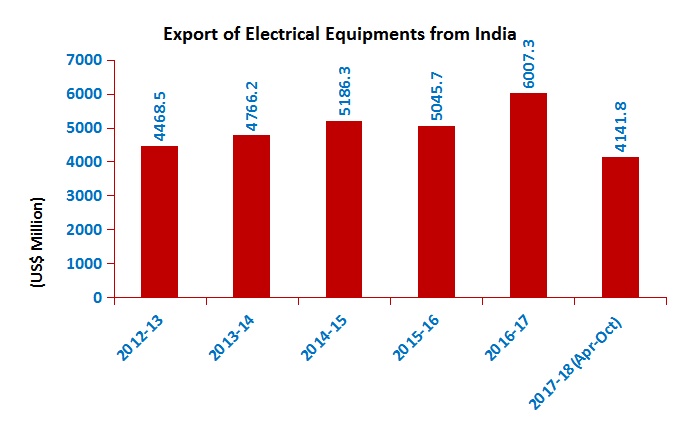 On the other hand, China supplies around 45% of India's import demand of electrical equipments. Other major suppliers in the Indian market are Germany, Japan, the US, South Korea and Italy.

In order to achieve and sustain the targeted annual GDP growth rate of around 8-9% over the next 20 years, growth of power sector is essential and hence the electrical equipments. It has been estimated that India will require to increase its electricity generation capacity by around five times by 2032. The electrical equipment market, as an inevitable link-industry to power, has every opportunity to grow sizably. In addition, rapid growth in metros, airports and other infrastructure projects is expected to generate huge demand for matching Generation equipments as well as T&D equipment.

Potential for export growth: Currently, share of India’s exports in the global market is less than 1%. With the electricity sector being a sunrise sector across the entire developing world, there exists a significant export potential for the domestic industry. Moreover, 'Make in India' initiative is an invitation to large foreign players to set up their production units in India across all segments of manufacturing. This in turn may also enhance exports significantly.