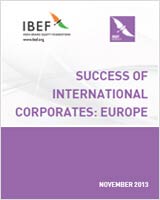 Relationship between India, and European nations gained momentum in the 1960s. Democratic ideologies adopted by India and most of the European countries are a strong foundation for the cordial relations between the two sides. In 1993, diplomatic ties were extended to trade, investment and economic cooperation by signing the Joint Political Statement. This, together with the 1994 cooperation agreement between the European Union and India, gave the much needed boost to bilateral trade relations. The relationship, which was majorly focused on trade and investment cooperation, was upgraded to strategic partnership in 2004.

Along with commercial relations, European nations have assisted India in its social development activities. Recently, the relationship has transformed from a donor-recipient one to that of cooperation for mutual benefit alongside opportunities. Moreover, burgeoning opportunities in India and the preferential status it enjoys in the global landscape—in the World Trade Organisation and other international institutions—have helped the country establish a long-term relation with European nations. During the course of achieving their respective goals, the two sides have also established strong political and security ties.