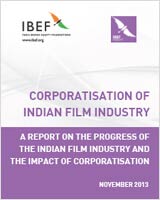 In 2013, the Indian film industry completes 100 years of film production and exhibition as an industry. From the days of the 1900s of black-and-white and silent movies, where a small group managed the entire process of film making, acting and exhibiting, the industry has come a long way. Today, it is a highly evolved and professionalised industry with multiple players offering specialised services in different areas of film making – from script writing, casting, recruiting technicians, sourcing technology and equipment to editing and post-production activities, marketing, distributing films and exhibiting on theatres, multiplexes and internet. As expected in 100 years, Indian cinema-makers have undergone a steady learning curve to arrive at the present status of an industry that is recognised world-wide. Today, it is well known that the Indian film industry is the largest in the world in terms of number of films produced and released in a year, with 1,255 films produced and released in 2011.