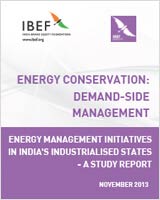 Since the end of the Tenth Five-Year Plan period, or 2007 onwards, India’s pace has increased significantly in terms of power generation capacity addition as well as in terms of making power available to widely distributed geographical boundaries. However, demand still exceeds supply. To be able to meet the increasing demand for electricity in tandem with high rates of GDP growth, significant augmentations to the installed generating capacity are a must, along with development of the associated transmission and distribution infrastructure. Also, this development has to occur in a manner that simultaneously and adequately addresses sustainable development and environmental concerns.

Average per capita consumption of electricity in India has risen from 15.6 units in 1950 to 800 units in 2012. While only 1500 villages in India were on the grid in 1950, the benefits of electricity had reached around 90.8 per cent of the 593,732 (Census 2001) villages by the turn of the century. However, even though India has come a long way in terms of additions in generation, transmission and distribution capacity since independence, demand has perennially been ahead of supply. Around 223,344 MW of capacity has been added during this period, but peak and normal energy shortages remain at levels of around 8-10 per cent each.