On a Steady Keel, Towards Disruptive Growth ( Volume 1 Issue 5 ) 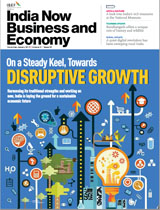 IBEF presents an enriched, enhanced ‘India Now’ magazine with more features, analysis and wider coverage. In this special issue of the magazine, the cover feature titled ' On a Steady Keel, Towards Disruptive Growth’ talks about India laying the ground for a sustainable economic future by harnessing its traditional strengths and working on new.

In 2014, the Government of India has launched several ambitious and forward looking initiatives that made the world sit up and take notice. These were not scattered programmes, but meticulously conceptualised and well directed initiatives that promised sweeping changes and gave an indication of the government’s seriousness regarding the economy.