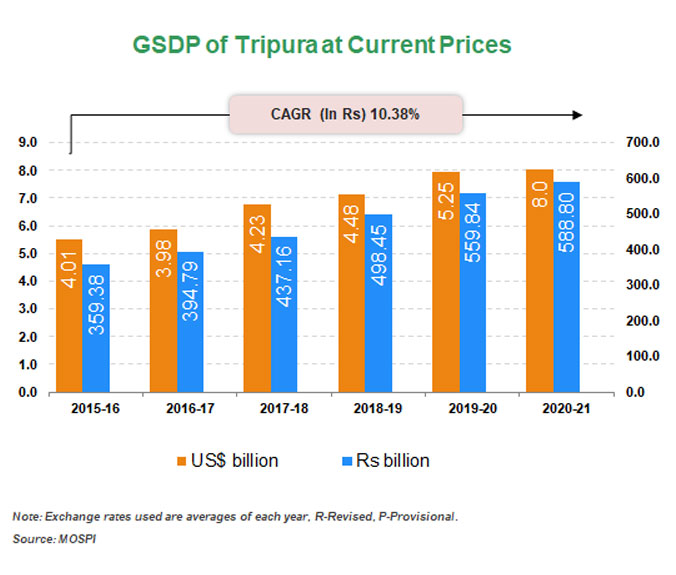 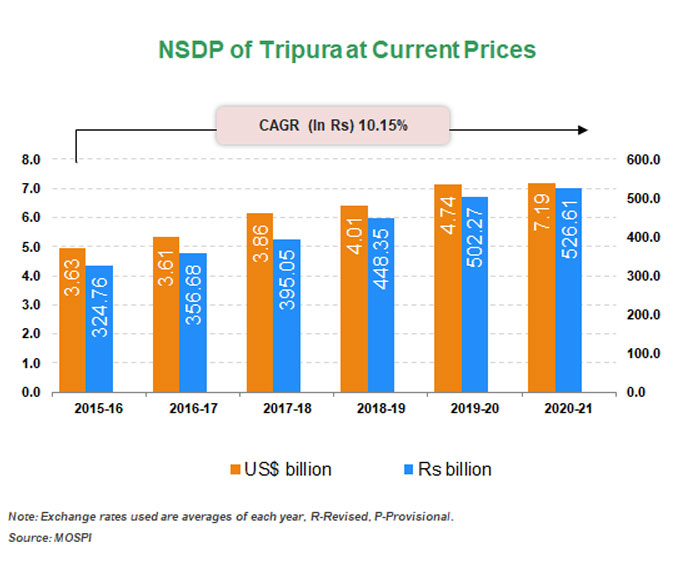 Tripura, one of the northeast states, share borders on the north, west, south, and southeast by Bangladesh, and in the east, it shares border with Assam and Mizoram.

The state has favourable climatic conditions for cultivation of various fruit and horticultural crops. It is rich in natural resources such as natural gas, rubber, tea, and medicinal plants.

The state is also rich in natural gas deposits, glass sands, limestone, plastic clay, and hard rock. With its pleasant climate and scenic landscape, Tripura is a favoured tourist destination. The state offers tourist attractions such as historical Hindu and Buddhist sites, temples, rivers, and rock carvings. In 2019, the number of foreign tourist arrivals in the state was recorded to be 154,405.

The state has favourable climatic conditions for cultivating various fruit and horticultural crops including rice, jackfruit, pineapple, potato, sugarcane, chilli, and natural rubber. Rice is the major crop of the state and is cultivated in 91% of the cropped area. The state has a wide variety of medical plants having 266 medicinal plants, 379 species of trees, 581 herbs, 320 shrubs and 165 climbers.

Tripura attracted Foreign Direct Investment (FDI) equity inflow worth US$ 0.43 million between October 2019 and March 2021 according to the data released by Department for Promotion of Industry and Internal Trade (DPIIT).

Tripura has 87.22% literacy rate, higher than the national average rate, making it an ideal destination for knowledge sectors.

The state has a wide range of fiscal and policy incentives for businesses under the Tripura Industrial Investment Promotion Incentive Scheme, 2017. Developing infrastructure, improved rail and air connectivity, and establishment of trade routes have facilitated trade.