Indian textiles and apparel industry contributed 2.3% to the GDP of India, 13% to industrial production and 12% to export earnings.

India’s textiles sector is one of the oldest industries in the Indian economy, dating back to several centuries.

The industry is extremely varied, with hand-spun and hand-woven textiles sectors at one end of the spectrum, while the capital-intensive sophisticated mills sector on the other end. The decentralised power looms/ hosiery and knitting sector forms the largest component in the textiles sector. The close linkage of textiles industry to agriculture (for raw materials such as cotton) and the ancient culture and traditions of the country in terms of textiles makes it unique in comparison to other industries in the country. India’s textiles industry has a capacity to produce wide variety of products suitable for different market segments, both within India and across the world.

The share of the India’s textiles and apparel exports in mercantile shipments was 11% in 2019-20.

Textiles industry has around 4.5 crore employed workers including 35.22 lakh handloom workers across the country.

The domestic textiles and apparel market stood at an estimated US$ 100 billion in FY19.

The production of raw cotton in India is estimated to have reached 35.4 million bales in FY20^. During FY19, production of fibre in India stood at 1.44 million tonnes (MT) and reached 2.40 MT in FY21 (till January 2021), while that for yarn, the production stood at 4,762 million kgs during same period.

Exports of textiles (RMG of all textiles, cotton yarn/fabs./made-ups/handloom products, man-made yarn/fabs./made-ups, handicrafts excl. handmade carpets, carpets and jute mfg. including floor coverings) stood at US$ 2.99 billion, as of June 2021.

The textiles sector has witnessed a spurt in investment during the last five years. The industry (including dyed and printed) attracted Foreign Direct Investment (FDI) worth US$ 3.75 billion from April 2000 to March 2021.

The production-linked incentive (PLI) scheme for man-made fibre and technical textiles will help boost manufacturing, increase exports and attract investments into the sector.

Indian government has come up with several export promotion policies for the textiles sector. It has also allowed 100% FDI in the sector under the automatic route.

Initiatives taken by Government of India are:

India is working on major initiatives, to boost its technical textile industry. Owing to the pandemic, the demand for technical textiles in the form of PPE suits and equipment is on rise. Government is supporting the sector through funding and machinery sponsoring.

Top players in the sector are attaining sustainability in their products by manufacturing textiles that use natural recyclable materials.

The future for the Indian textiles industry looks promising, buoyed by strong domestic consumption as well as export demand. With consumerism and disposable income on the rise, the retail sector has experienced a rapid growth in the past decade with the entry of several international players like Marks & Spencer, Guess and Next into the Indian market.

High economic growth has resulted in higher disposable income. This has led to rise in demand for products creating a huge domestic market. 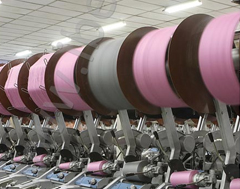 The technical textile industry in india worth US$ 17 billion is expected to grow at a rate of 20 per cent annually to reach US$ 36 billion by 2016-17.