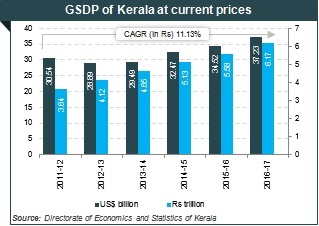 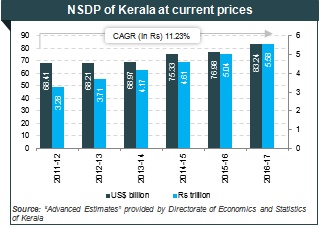 Kerala is one of the few states to have marketed its natural beauty successfully to the leisure tourism sector. The state's unique heritage and cultural diversity have helped attract tourists from the world over. BBC Travel survey has rated Kerala as the top favourite tourist destination among foreign travellers. Foreign tourist arrivals increased by 6.23 per cent during 2016 over 2015.

It is a leading agricultural state in the country and the largest producer of rubber, pepper, coconut and coir. As per budget 2018-19, Government of Kerala proposed an outlay of US$ 1,131.75 million for the Agriculture, Animal Husbandry and Co-operation sector.

Kerala has a wide range of fiscal and policy incentives for businesses under the Industrial and Commercial Policy and has well-drafted sector-specific policies. Kerala stands 18th among Indian states in rankings based on ease of doing business and reforms implementation, according to a study by the World Bank and KPMG.

According to DIPP, during April 2000 to December 2017, FDI inflows into Kerala, including Lakshadweep, totalled to US$ 1.93 billion.