India's telecom sector is the second largest globally with regards to subscriber base.

* Also, India is one of the biggest consumer of data worldwide. As per TRAI, average wireless data usage per wireless data subscriber was 11 GB per month in FY20.

* By 2025, India will need ~22 million skilled workers in 5G-centric technologies such as Internet of Things (IoT), Artificial Intelligence (AI), robotics and cloud computing.

* The Union Cabinet approved Rs. 12,195 crore (US$ 1.65 billion) production-linked incentive (PLI) scheme for telecom & networking products under the Department of Telecom. On October 14, 2021, 31 companies comprising 16 MSMEs and 15 Non-MSMEs (eight domestic and seven global companies) have been approved under the Production-linked Incentive (PLI) Scheme. To drive the development of 6G technology, the Department of Telecommunications (DoT) has developed a sixth generation (6G) innovation group.

Currently, India is the world’s second-largest telecommunications market with a subscriber base of 1.16 billion and has registered strong growth in the last decade. The Indian mobile economy is growing rapidly and will contribute substantially to India’s Gross Domestic Product (GDP) according to a report prepared by GSM Association (GSMA) in collaboration with Boston Consulting Group (BCG). In 2019, India surpassed the US to become the second-largest market in terms of the number of app downloads.

The liberal and reformist policies of the Government of India have been instrumental along with strong consumer demand in the rapid growth of the Indian telecom sector. The Government has enabled easy market access to telecom equipment and a fair and proactive regulatory framework, that has ensured the availability of telecom services to consumers at affordable prices. The deregulation of Foreign Direct Investment (FDI) norms have made the sector one of the fastest-growing and the top five employment opportunity generator in the country.

The total number of internet subscribers reached 836.86 million in April-June 2022. The wireless segment accounted for 95.4% of the total telephone subscriptions In June 2022.

Over the next five years, rise in mobile-phone penetration and decline in data costs will add 500 million new internet users in India, creating opportunities for new businesses.

By 2025, India will need ~22 million skilled workers in 5G-centric technologies such as Internet of Things (IoT), Artificial Intelligence (AI), robotics and cloud computing.

With daily increasing subscriber base, there have been a lot of investment and development in the sector. FDI inflow in the telecom sector stood at US$ 39.02 billion between April 2000-September 2022.

Some of the developments in the recent past are:

The Government has fast-tracked reforms in the telecom sector and continues to be proactive in providing room for growth for telecom companies. Some of the key initiatives taken by the Government are as follows:

The Indian Government is planning to develop 100 smart city projects, and IoT will play a vital role in developing these cities. The National Digital Communications Policy 2018 envisaged attracting investment worth US$ 100 billion in the telecommunications sector by 2022. App downloads in India is expected to increase to 18.11 billion in 2018F and 37.21 billion in 2022F. A major force behind meeting the telecom industry's present and future technological needs is the Atmanirbhar Bharat programme. There has been a push towards developing indigenous 5G technology to help India move towards 5G rapidly. India is also planning for 6G in advance and has started investing in the development of 6G technology already.

Indian Telegraph (Infrastructure Safety) Rules 2022 have been formulated by the Department of Telecommunications under the Ministry of Communications.

The telecom sector in India is witnessing a bloom in reforms because of a good response from the launching of 5G networks and is expected to attract investments worth more than US$ 18 billion (Rs 1.5 trillion in 2023).

Indian telecom industry to grow by US$ 12.5 billion every three years: Deloitte-CII study...

Deloitte-Confederation of Indian Industry (CII) Study says that the Indian telecom industry is expected to grow by US$ 12.5 billion every three years.

According to the TRAI Chairman, Mr. P.D. Vaghela, India will be the first to hold a satellite spectrum auction.

India is the largest connected nation with 8 million broadband users, according to the Minister of State for Electronics and Information Technology. 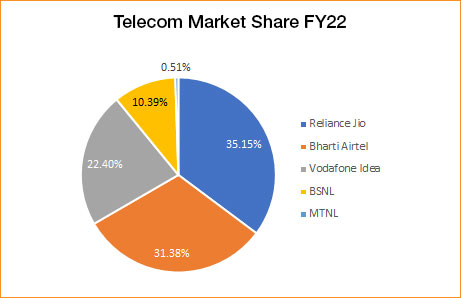 India is the second largest telecom market in the world.