India's FMCG market grew at 16% in FY21, the fastest seen in the previous nine years.

* Indian packaged food market is expected to double to US$ 70 billion by 2025.

* Rising digital connectivity in cities and rural areas is driving the demand for FMCG (through e-commerce portals).

* E-commerce segment is forecast to contribute 11% to the overall FMCG sales by 2030.

* Investment approval of up to 100% foreign equity in single brand retail and 51 % in multi-brand retail.

* The union government’s production-linked incentive (PLI) scheme gives companies a major opportunity to boost exports with an outlay of US$ 1.42 billion.

* Investment in this sector attract investors as FMCG products have demand throughout the year.

Fast-moving consumer goods (FMCG) sector is India’s fourth-largest sector and has been expanding at a healthy rate over the years as a result of rising disposable income, a rising youth population, and rising brand awareness among consumers. With household and personal care accounting for 50% of FMCG sales in India, the industry is an important contributor to India’s GDP.

India is a country that no FMCG player can afford to ignore due to its middle class population which is larger than the total population of USA. The Indian FMCG market continues to rise as more people start to move up the economic ladder and the benefits of economic progress become accessible to the general public. More crucially, with a median age of just 27, India's population is becoming more consumerist due to rising ambitions. This has been further aided by government initiatives to increase financial inclusion and establish social safety nets.

Growing awareness, easier access and changing lifestyles have been the key growth drivers for the sector. The urban segment (accounts for a revenue share of around 55%) is the largest contributor to the overall revenue generated by the FMCG sector in India. However, in the last few years, the FMCG market has grown at a faster pace in rural India compared to urban India. Semi-urban and rural segments are growing at a rapid pace and FMCG products account for 50% of the total rural spending.

The retail market in India is estimated to reach US$ 1.1 trillion by 2020 from US$ 840 billion in 2017, with modern trade expected to grow at 20-25% per annum, which is likely to boost revenue of FMCG companies. The FMCG market in India is expected to increase at a CAGR of 14.9% to reach US$ 220 billion by 2025, from US$ 110 billion in 2020. The Indian FMCG industry grew by 16% in CY21 a 9- year high, despite nationwide lockdowns, supported by consumption-led growth and value expansion from higher product prices, particularly for staples. The Indian processed food market is projected to expand to US$ 470 billion by 2025, up from US$ 263 billion in 2019-20.

FMCG giants such as Johnson & Johnson, Himalaya, Hindustan Unilever, ITC, Lakmé and other companies (that have dominated the Indian market for decades) are now competing with D2C-focused start-ups such as Mamaearth, The Moms Co., Bey Bee, Azah, Nua and Pee Safe. Market giants such as Revlon and Lotus took ~20 years to reach the Rs. 100 crore (US$ 13.4 million) revenue mark, while new-age D2C brands such as Mamaearth and Sugar took four and eight years, respectively, to achieve that milestone.

Advertising volumes on television recorded healthy growth in the July-September quarter, registering 461 million seconds of advertising, which is the highest in 2021. FMCG continued to maintain its leadership position with 29% growth in ad volumes against the same period in 2019. Even the e-commerce sector showed a healthy 26% jump over 2020.

Some of the recent developments in the FMCG sector are as follows:

Some of the major initiatives taken by the Government to promote the FMCG sector in India are as follows:

Rural consumption has increased, led by a combination of increasing income and higher aspiration levels. There is an increased demand for branded products in rural India. On the other hand, with the share of unorganised market in the FMCG sector falling, the organised sector growth is expected to rise with increased level of brand consciousness, augmented by the growth in modern retail. Another major factor propelling the demand for food services in India is the growing youth population, primarily in urban regions. India has a large base of young consumers who form majority of the workforce, and due to time constraints, barely get time for cooking. Online portals are expected to play a key role for companies trying to enter the hinterlands. Internet has contributed in a big way, facilitating a cheaper and more convenient mode to increase a company’s reach. The number of internet users in India is likely to reach 1 billion by 2025. It is estimated that 40% of all FMCG consumption in India will be made online by 2020. E-commerce share of total FMCG sales is expected to increase by 11% by 2030. It is estimated that India will gain US$ 15 billion a year by implementing GST. GST and demonetisation are expected to drive demand, both in the rural and urban areas, and economic growth in a structured manner in the long term and improved performance of companies within the sector.

The Trade Promotion Council of India said that there is a need for India to focus on the processed food sector as it holds huge potential to boost the country’s exports.

India is predicted to have 214 million hyperlocal e-commerce shoppers by the end of 2022, according to the ‘Digital Commerce in India-Hyperlocal Commerce’ report by WATConsult.

1K Kirana has raised US$ 25 million in a Series-B funding round and plans to serve more than 10 million consumers in the next 12 months. 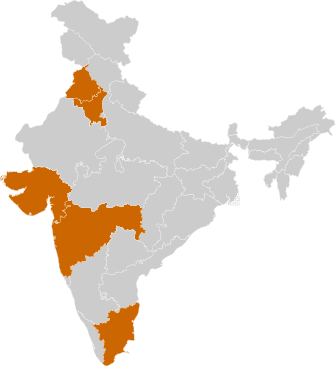