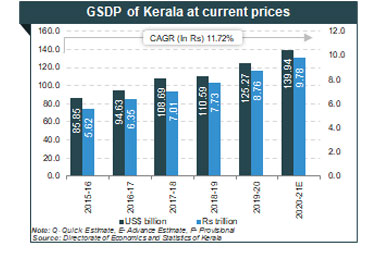 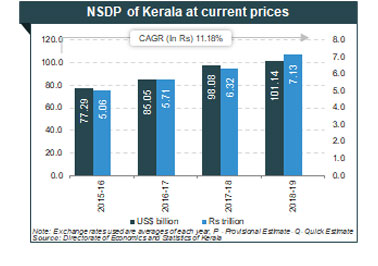 Kerala is one of the few states to have marketed its natural beauty successfully to the leisure tourism sector. The state's unique heritage and cultural diversity has attracted tourists from around the world. BBC Travel survey has rated Kerala as the top favourite tourist destination among foreign travellers in 2018.

Kerala ranks second in the Investment Climate Index followed by Karnataka as per a policy research working paper by the World Bank. The state stands second due to its world-class infrastructure and well-trained human resource pool. Kerala's traditional industries include handloom, cashew, coir, and handicrafts.

According to the Department for Promotion of Industry and Internal Trade (DPIIT), cumulative FDI inflow in Kerala was valued at US$ 269.61 million between October 2019 and March 2021.

Under SEZ Act, 2005, Kerala has 29 formally approved SEZs, 25 notified SEZs and 19 exporting SEZs. The state has a techno park in Thiruvananthapuram which has been instrumental in attracting global electronics manufacturers, an info park in Kochi, and a cyberpark in Kozhikode.

Some of the key performance indicators are as below: