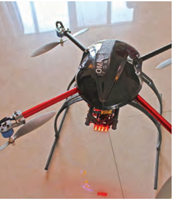 Aakash Sinha, Robotics Scientist and Founder of Omnipresent Robot Tech, has an impressive resume. He has worked with some top US robotics companies including Lockheed-Martin. As an employee he proved his mettle, winning the outstanding employee award as the Technical Head at iRobot Corp, where his team delivered over 3,000 PackBot robots to the US Army. As an engineer-scientist too, he was making his mark with more than 15 international publications in robotics. After 10 years in the field of robotics and accolades galore, it was just about two years ago that the MS/Ph.D in Robotics from Carnegie Mellon University decided to become an entrepreneur.

Omnipresent, the company, was initially launched in the US. "It was started by my wife Jyoti, who is the co-founder, and me on a shared vision to build truly intelligent robots for the future," says Sinha sharing the belief that is the foundation of Omnipresent. The move to India was motivated as much by ideals as sound business sense. "We wanted to contribute back to India and also saw the emerging market here in robotics," says Sinha. The first branch of Omnipresent was set up in Delhi and its first contract was with Defence Research and Development Organisation (DRDO) to build a bomb disposal robot. "We were so excited with this prospect that we decided to move all our operations to India," says Sinha. Currently, Omnipresent is based in Delhi. The project was successfully delivered to DRDO which was earlier convinced that robots could only be built abroad, reveals Sinha.

Sinha sees a bright future for robotics in India. "It is one of the big disruptive technologies coming up in the next 10 years," he predicts adding, "this wave will be similar to the rapid movements witnessed in the information technology industry. Nobody could have predicted the extent to which they would revolutionise the world, as they have done today." In fact, Sinha envisages a big role for robotics in human life. "Robotics will become eubiotics (eu=good/bios=life) and omnipresent (present everywhere simultaneously), just as our company name suggests. We can see robots cleaning our homes, guarding our borders, fighting wars for us, assisting our elderly and being our companions, doing monotonous household chores and also protecting us. In domestic and civil life, robots are going to be the future of our civilization and in 10–15 years we will realise how integral to it they have become.