ZOMATO: TOP OF THE FOOD CHAIN 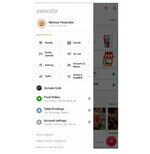 Zomato, an Indian start-up is in the business of online food ordering. It initially launched Foodiebay.com in Gurugram in 2008, a website that scanned menus and provided ratings and recommendations on restaurants. It soon expanded to cities like Kolkata, Mumbai, Pune and Bengaluru and renamed itself as Zomato in 2010. Presently the food ordering business has its presence in 24 countries and has achieved a milestone of 21 million monthly online food orders in India alone. Zomato’s overall revenue from food ordering increased from 35 per cent to 65 per cent after acquiring a delivery provider company named Runnr in 2017. After receiving its first investment in 2010 by info edge, Zomato started expanding its operations and achieved improved growth. The company made nine acquisitions by 2015 of which five acquisitions were made in a single year. By 2016 Zomato was valued at US$ 1 billion. It has raised about US$ 635 million in 11 rounds.

Over the years, Zomato has been able to come up with new products like Zomato Gold, Treats and hygiene ratings to tackle the newcomers like Uber and Ola. Zomato gold was labelled as the fastest user subscription programme in the country after getting 300,000 paid users and partnering with about 2,200 restaurants. Having overcome the initial tumultuous period and firmly establishing itself as a leading player in terms of deciding your next meal, Zomato is in an excellent position to capitalise on the growth of the sector across the length and breadth of the country.