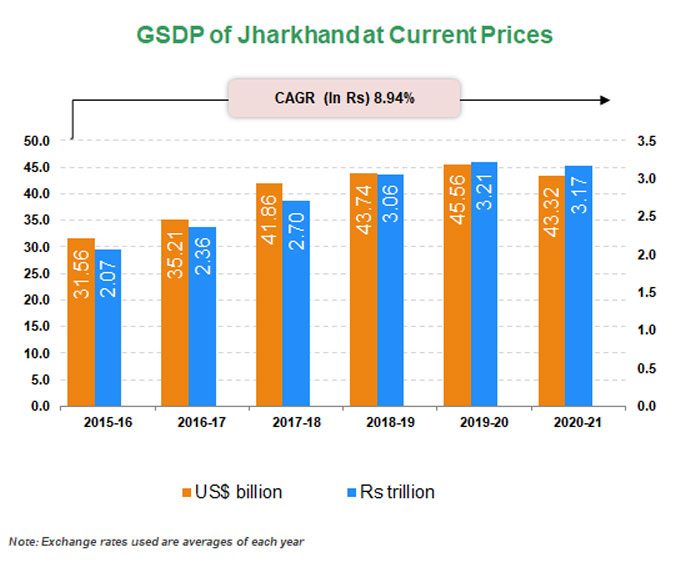 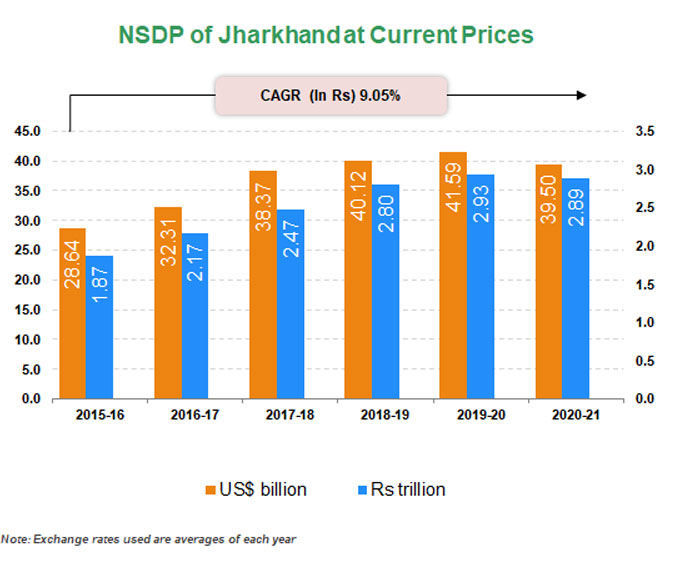 Jharkhand is located in the eastern part of India. The state shares its borders with West Bengal in the east, Uttar Pradesh and Chhattisgarh in the west, Bihar in the north and Odisha in the south. In India, Jharkhand is one of the leading states in terms of economic growth. At current prices, Jharkhand’s total GSDP stood at Rs. 3,61,381 crore (US$ 49.48 billion) in 2021-22, a 5% increase over FY20.

Jharkhand is one of the richest mineral zones in the world and boasts of 40% and 29% of India's mineral and coal reserves, respectively. Due to its large mineral reserves, mining and mineral extraction are the major industries in the state. Mineral production (excluding fuel minerals, atomic minerals and minor minerals) in the state stood at Rs. 927.48 crore (US$ 127.21 million) in FY21 (until August 2020).

The state’s industries enjoy a unique location-specific advantage as it is close to the vast market of eastern India. It is closer to the ports of Kolkata, Haldia and Paradip which helps in transportation of minerals.

According to the Department for Promotion of Industry and Internal Trade (DPIIT), cumulative foreign direct investment (FDI) inflows in Jharkhand stood at US$ 792 million in FY21 and were US$ 2.64 billion between October 2019 and March 2021. In 2019, the number of IEM filed were 8 and the amount of investments proposed were Rs. 382 crore (US$ 75.46 million).

Jharkhand offers a wide range of fiscal and policy incentives to industries, under the Industrial Policy, 2012. The state also has policies for IT and special economic zones (SEZs) offering sector-specific incentives, as well as the Jharkhand Energy Policy 2012 which aims to supply reliable and quality power in an efficient manner at a reasonable price.