Introduction
Advanced technology is gaining prominence across the globe, especially after the pandemic. To keep pace with this trend, Indian companies have been adopting advanced technologies, such as Artificial Intelligence (AI), Big Data, Augmented Reality (AR) and Virtual Reality (VR), to improve efficiency and productivity. AR is a technology that superimposes an image onto the user's view of the natural world and enhances it with sound and touch. VR, on the other hand, refers to a computer-generated 3D environment that is fully digital. Complex things can be simplified by visualisation using both these technologies. A smart device and camera are required to experience AR, while VR is experienced through a proper VR headset. The global AR/VR market size stood at US$ 28 billion in 2021 and is projected to reach US$ 250 billion by 2028, according to Statista. In India, AR/VR adoption has grown across business verticals, expanding from US$ 0.34 billion in 2017 to US$ 1.83 billion in 2020 at a compounded annual growth rate (CAGR) of 75%.

Overview of AR/VR Market in India
According to Research and Markets, the total market size of AR/VR in India is expected to advance at a CAGR of 38.29% to US$ 14.07 billion by 2027, driven by increased smartphone penetration and widespread internet connectivity, and this trend is expected to continue. As of 2021, India had 1.2 billion mobile subscribers, of which 750 million were smartphone users. Most of the young population in Tier 2 and Tier 3 cities have high tech literacy, which has enabled companies/app providers to offer AR-based experiences. AR/VR technology is widely used in retail, education, gaming, and healthcare. Usage of AR/VR headsets has increased in the consumer segment due to the lower cost of wearables. The hardware segment dominated India's AR and VR segment with 71% share as of FY20. 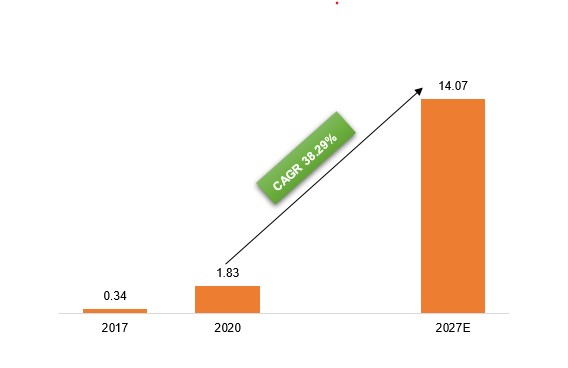 Role of AR/VR in Different Sectors
The enterprise segment accounted for 72% of the AR/VR market as of 2020; the technology has found application in the automotive, oil & gas, logistics and healthcare sectors. AR/VR is most commonly used in the retail and gaming segment in the consumer space.

Education: Adoption of technology helps to make the learning process interactive and aids students in understanding concepts better through visual presentations. In India, Byju's is one of the edtech startups offering AR services. According to a report titled ‘Augmented and virtual reality in education’, the AR market in education is expected to reach US$ 5.3 billion in 2023.

Retailing: AR/VR is the future of retail as its adoption in the segment helps enhance customer experience; for example,  customers can now try a product before purchasing them. Retailers such as Myntra, IKEA, and Lenskart offer AR-based services, which enables customers to make informed decisions without even visiting the stores.

Healthcare: AR/VR is widely used in medical education, diagnostics, surgery and fitness. AR-powered diagnostics help contain the spread of the COVID virus and provide support during complex surgical procedures; these are some of the most important benefits of adopting AR/VR in healthcare.

AR/VR Startups in India
Over the last few years, nearly 260 startups focusing on the  AR/VR segment have been operating in India. Some of these players are mentioned below:

Recent Trends
AR/VR is rapidly changing how individuals experience a product. Businesses, governments, and allied agencies have come to realise the wide scope of AR/VR. Some of the key trends in the AR/VR space are as follows:

AR/VR Market to Witness Robust Growth
The Indian AR/VR market is expected to witness a robust CAGR of 38% by 2027 through technological advances. Demand for AR/VR in the edtech, manufacturing, healthcare and retail sectors is high and can soon expand to sectors such as travel, hospitality and media & entertainment. There is potential for integration of technologies such as AI with AR/VR and AR-powered autonomous cars in future. Adopting 5G technology will strengthen the mobile network and increase data speed, accelerating the adoption of AR/VR. Accessing AR via web browsers apart from mobile devices could be another reality. In India, smartphone penetration was 54% in 2020 and is expected to reach 96% by 2040, further improving AR/VR-based technology accessibility.