The Fisheries & Aquaculture Sector of India

Overview of the Fisheries & Aquaculture Sector of India
India is the world's second-largest aquaculture nation and the third-largest fish producer after China. The Indian Blue Revolution has led to a major improvement the fishing and aquaculture industries. The industries are regarded as sunrise sectors and are anticipated to have a big impact on the Indian economy.

Indian fisheries have recently seen a paradigm shift from inland to marine-dominated fisheries, with the latter becoming a major contributor to fish output, from 36% in the middle of the 1980s to 70% in the recent past. The transition from capture-to culture-based fishing in inland fisheries has opened the way for a stable blue economy. At the primary level, the sector supports the livelihoods of roughly 16 million fishers, fish farmers, and thousands of people along the value chain.

While inland fisheries and aquaculture have increased in absolute terms, their potential has not been fully realised. The 191,024 km of rivers and canals, 1.2 million ha of floodplain lakes, 2.36 million ha of ponds and tanks, 3.54 million ha of reservoirs, and 1.24 million ha of brackish water resources—vast, underutilised resources—offer excellent opportunities for increased production, creation of livelihoods, and emergence of economic prosperity.

Current state of the Fisheries & Aquaculture Sector of India
More than 10% of the world's fish and shellfish species are found in India's rich and diverse fisheries, including deep seas, lakes, ponds and rivers. The country's extensive coastline, exclusive economic zone (EEZ) and sizable continental shelf region are home to marine fisheries resources. The resources for inland fisheries include rivers, canals, floodplain lakes, ponds, tanks, brackish water and regions that influence salty or alkaline conditions. Aquaculture in brackish or saline water has flourished in India. Farmed shrimp production increased from 20 MT in 1970 to 7.47 lakh MT in 2020, adding significantly to the export revenues of fisheries, which has seen tremendous expansion over few decades.

Presently, India produces 7.96% of the world's fish. The estimated total fish output for FY 2020–21 is 14.73 million metric tonnes (MMT), with contributions from the inland and marine sectors at 11.25 MMT and 3.48 MMT, respectively. With India being one of the top seafood exporters worldwide, the fishing industry is crucial to its economy and has historically been a significant source of foreign exchange earnings. 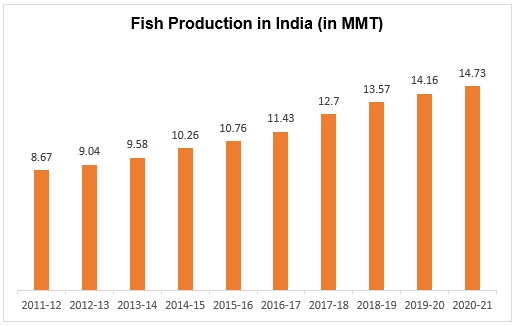 Government Initiatives
Through concerted and collaborative efforts by the government and private sectors, India's fisheries and aquaculture sectors have made remarkable advancements towards modernisation and sustainable economic growth over the past few years. The government of India, led by Prime Minister Mr. Narendra Modi, recognised the substantial potential of this industry and recently unveiled the Pradhan Mantri Matsya Sampada Yojana (PMMSY), a new flagship programme with a significant investment of Rs. 20,050 crore (US$ 2.46 billion) for the growth and expansion of fisheries sector in the country.

Pradhan Mantri Matsya Sampada Yojna (PMMSY): The scheme aims to address significant productivity and production gaps in the fisheries sector, infuse innovation and cutting-edge technology, enhance post-harvest infrastructure and management, modernise and strengthen the value chain and traceability and establish a framework for effective fisheries management and the welfare of fishermen. The scheme highlights the importance of leveraging fisheries potential in a sustainable, ethical, inclusive and equitable way.

The PMMSY lays out ambitious goals for FY 2025, including increasing fish production by 70 lakh MT, increasing aquaculture productivity from the current national average of 3 tonnes per Ha to 5 tonnes per Ha, doubling exports from Rs. 46,589 crore (US$ 5.72 billion) to Rs. 100,000 crore (US$ 12.28 billion), creating more than 55 lakh job opportunities, and doubling fishers' and fish farmers' incomes to consolidate the fisheries' sectoral gains and boost economic growth.

The main objectives of PMMSY are as follows:

Road Ahead
The Indian fisheries and aquaculture sectors have become fastest growing agriculture allied sectors in the country. The share of inland fisheries and aquaculture in overall fish production has gradually increased over the last several years. India has also became top producer and exporter of shrimp as a results of using contemporary technologies. New areas, such as salty and brackish waterways, reservoirs, and flood plains, are being used for profitable aquacultures. Wastelands are being transformed into wealthy lands.

The government has implemented several supportive measures to increase the potential of these sectors. It is developing fishing infrastructure, landing areas, river ranching, and fish seeding on major rivers, including the Ganga, the Brahmaputra, and others. In the Himalayan and North Eastern states, cold water fisheries, trout brooding facilities and hatcheries are being developed.

The government aims to increase fish production from 140 lakh tonnes to 220 lakh tonnes by FY 2025, which can be achieved by marine fisheries, inland fisheries, and aquaculture. The use of deep-sea vessels, modern and effective fishing methods, a network of seamless cold chains, cold storage facilities, ice plants, fish processing units, fish product units and many more have been envisioned. Given the positive developments, it is reasonable to believe that India's fisheries and aquaculture sector have a bright future.