The Tea Industry in India

Overview of the Indian Tea Industry
The Indian tea industry dates back to 172 years, and occupies a significant and distinct position in the Indian economy. The tea products can be broadly segmented into crush, tear and curl (CTC), orthodox and green tea. In India, nearly 80% of all families consume tea, making it the most popular beverage in the country. Majority of tea plantations in India are located in rural hills and backward regions of the Northern, Eastern, and Southern states.  In addition, some tea varieties, for instance, Darjeeling tea, are grown only in India and are in high demand worldwide. In India, tea is traded and purchased through private selling and auctions. The majority of tea trading is conducted through auctions in six major cities: Calcutta, Guwahati, Siliguri, Cochin, Coonoor and Coimbatore. With more than 13,000 gardens and over two million workers, the Indian tea industry is one of the largest in the world. The Indian tea industry generates a sizable amount of foreign exchange and high revenue for the government. Strong geographical indications, significant investments in tea processing facilities, ongoing innovations, expanded product mix and strategic market growth contribute to Indian tea's reputation as one of the best in the world.

Production & Exports Scenario
India is one of the top tea-consuming countries in the world, with domestic consumers accounting for 80% of the country's tea production. The northern part of India is the biggest tea producer, accounting for approximately 83% of India's annual tea production in 2022, with major contributions from Assam and West Bengal. The remaining 17% of India's tea is produced in the southern region, with Tamil Nadu, Kerala and Karnataka being the top three producers. Overall, 1,344.4 million kg of tea was produced in India in FY 2021-22. 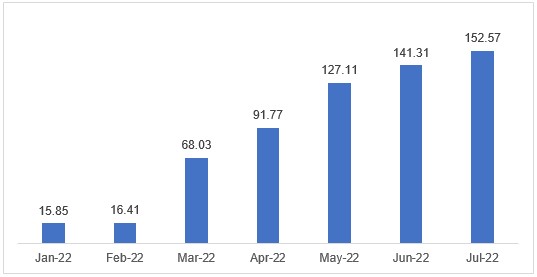 With 10% of global exports, India is one of the world's top 5 tea exporting countries. In FY 2021-22, tea exports from India were valued at US$ 750.63 million. Black tea is the most popular variety exported from India, accounting for approximately 96% of total tea exports. Other export varieties include regular tea, green tea, herbal tea, masala tea and lemon tea. Black tea, regular tea and green tea account for roughly 80%, 16% and 3.5% of the total tea exports from India, respectively. India being the world's second-largest tea producer holds a strong position in the global export market. Russia, Iran, the UAE, the US, the UK, Germany and China are some of the top countries that import tea from India. India exported US$ 61.48 million worth tea to these countries in the first quarter of FY 2022-23.

Recent trends in the Indian Tea Industry
Consumer choices have become increasingly sophisticated with the onset of globalisation. Customers have started demanding innovation and diversity in all sectors, as the variety of items available increased due to the removal of international barriers. The tea industry, which the country holds in high esteem, has also gone through a major shift, requiring firms to adapt to the most recent consumer trends in the market.

Some of the major schemes and promotional activities undertaken by the Tea Board of India are mentioned as follows:

Road Ahead
The primary driving force behind the sector is the widespread consumption of tea across all socioeconomic strata in India. The country's rapid economic development and rising disposable income of the middle class are also accelerating the industry's growth. The rise in demand for packaged tea in urban and rural areas, where there is less chance of adulteration and simpler storage, is also helping the Indian tea sector expand rapidly.

In the next few years, the tea industry’s growth is anticipated to be driven by the rising popularity of cafes and lounges serving different beverage varieties. The industry's distribution networks, which include supermarkets and neighbourhood "Kirana" stores, will also aid in the industry's growth. The RTD (ready to deliver) category has the potential to grow favourably, as consumers explore more convenient foods and beverages as a result of busier lifestyles and growing workforce participation. An increase in packaging and flavour innovations will also fuel the market in the future.