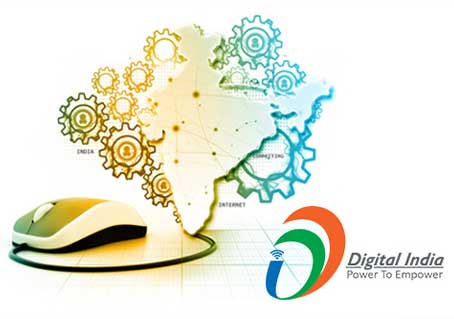 The government’s increased focus to create a digitally empowered economy is forecast to benefit all sectors, wherein core digital sectors such as information technology & business process management, digital communication services and electronics manufacturing are likely to double their GDPs to US$ 355-435 billion by 2025.

As per NASSCOM’s (National Association of Software & Services Companies) Strategic Review 2021, India's technology sector was estimated to reach US$ 194 billion in FY21, a 2.3% YoY increase on the back of rapid digital transformation and technology adoption in the country. In 2020, the Indian technology sector accounted for 8% of India’s gross domestic product (GDP). In addition, the sector remained a net employer with emphasis on digital upskilling. NASSCOM also estimated that the country’s digital talent pool is likely to exceed ~1.17 million employees in FY21, a 32% YoY surge.

In another report, McKinsey highlighted that the ‘Digital India’ initiative is expected to boost the country’s digital economy to US$ 1 trillion by 2025, up from US$ 200 billion in 2018.

Need for ‘Digital India’
Despite rising adoption of digital technologies and the IT industry, India’s digital divide is deep and is creating economic disparities between those who can afford technology and those who cannot, thereby affecting the country’s overall digital growth.

To bridge this divide, the government introduced the ‘Digital India’ initiative, covering various programmes such as e-governance, mobile e-health services and digital finance for digital inclusiveness. Through schemes such as Aadhaar (a digital ID programme), BharatNet and public Wi-Fi hotspots, the ‘Digital India’ initiative is enabling the country (including small towns and rural areas) to develop its internet infrastructure. According to McKinsey’s Report, between 2014 and 2018, Uttar Pradesh (recorded >36 million internet subscribers), and Madhya Pradesh and Jharkhand were among the five fastest-growing states in internet penetration.

Key initiatives under the ‘Digital India’ mission are as follows:

The Road Ahead…
The rising use of unified payments interface (UPIs) strongly indicate that more and more people in India are adopting a digital lifestyle. Moreover, the number of transactions being processed via UPIs reaching 2.73 billion (>2x) in March 2021, up from 1.25 billion in March 2020, highlights that the government's ‘Digital India’ initiative has helped the country achieve significant digital progress.

With the emergence of technologies such as artificial intelligence, the Internet of things (IoT), cloud computing, blockchains and robotics, the government can use these new avenues to further enable digital and technology growth in India. As per a McKinsey report, a digital economy is likely to create 60-65 million jobs by 2025. With the ‘Digital India’ mission, the government is well-aligned to tap this opportunity and create an economic value of US$ 1 trillion by 2025 from the digital economy.