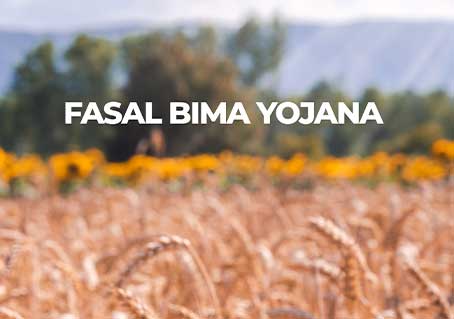 Introduction
Launched in 2016, the Pradhan Mantri Fasal Bima Yojana (PMFBY) is a large-scale crop subsidy insurance scheme that was aimed to safeguard farmers. This flagship scheme was designed in line with the One Nation–One Scheme and replaces three older initiatives—Modified National Agricultural Insurance Scheme (MNAIS), Weather-based Crop Insurance Scheme and the National Agricultural Insurance Scheme (NAIS)—by incorporating their best features and removing inherent shortcomings to improve insurance services available to farmers. This scheme is being administered by the Department of Agriculture, Cooperation and Farmers’ Welfare under the Ministry of Agriculture, along with empanelled general insurance companies.

The scheme provides coverage for the entire cropping cycle from pre-sowing to post-harvest and midseason adversities. It extends coverage against financial losses incurred by farmers due to unforeseeable events such as crop failure due to localised risk, post-harvest losses, natural calamities, unseasonal rainfall, crop diseases and pest infestations. The primary goal of the initiative is to reduce the burden of insurance premiums on farmers and ensure early settlement of claims.

Objectives
The PM Fasal Bima Yojana operates under the ‘One Nation, One Crop, One Premium’ motto and aims to achieve the following goals:

Insurance Coverage under the PMFBY Scheme

Under this scheme, the insurance cover is limited to specific crops and agricultural risks related to the crop yield. The list of notified crops includes food crops (i.e., cereals, millets, and pulses), oilseeds, annual commercial crops, and annual horticultural crops.

It also covers all stages of the crop production cycle. The inclusions and exclusions of insurance cover provided are as follows:

Premiums under the PMFBY Scheme

Beneficiaries of the PMFBY Scheme

According to the government, under this scheme, all farmers (including sharecroppers and tenant farmers) growing notified crops in the notified areas are eligible for coverage, if they have insurable interest for the insured crops.

The eligible farmers can be broadly classified into two categories:

When the scheme was launched in 2016, a total of 5.8 crore farmers were insured, wherein 75% farmers received mandatory coverage as per the SAO loan allocations and 25% farmers voluntarily opted for insurance.

* Information is based on declarations received from implementing insurance companies pending verification by the Department of Agriculture, Cooperation and Farmers’ Welfare, government of India with state governments.

This scheme was implemented by 18 insurance companies that became empanelled partners by successfully completing the L1 bidding process and are listed as follows:

Progress
As per the data released by the Department of Agriculture, Cooperation and Farmers’ Welfare under the Ministry of Agriculture, the annual breakdown of value of insurance packages, share in premiums, claims filed, and claims settled are as follows:

Note: Some claim settlements are pending due to issues such as payment failure, pending state subsidy, discrepancies in yield data, etc.
^2019 Kharif crop cycle only, 2020 Rabi crop cycle data is yet to be published

With this scheme, the government digitised land records and integrated required documents into the PMFBY portal by implementing various technology solutions. It developed the PMFBY crop insurance app to enable enrolments and report crop losses. The app also linked to the farmer’s bank account and thus, facilitated the claims settlement processes. Between 2016 and 2020, the average sum insured per hectare of land increased from Rs. 15,000 (US$ 204.4) under the previous initiatives to Rs. 40,700 (US$ 554.7) under the PMFBY.

The Way Forward…
Overall, the PMFBY scheme is a milestone initiative to provide a comprehensive risk solution with low, uniform premium rates to farmers across the country. Between 2016 and 2020, the Ministry of Agriculture & Farmers’ Welfare worked extensively to revise the PMFBY scheme by engaging with stakeholders and addressing their challenges. Following this, the ministry released the revised operational guidelines for the PMFBY with the Rabi 2019 crop cycle.

As of 2021, the PMFBY is deemed to be the largest crop insurance scheme in the world in terms of farmer enrolments; and the third-largest scheme in terms of insurance premiums. Under the FY 2021–22 budget, the Union Government allocated Rs. 16,000 crore (US$ 2,180 million) for the PMFBY initiative. This represented a budgetary increase of Rs. 305 crore (US$ 41.5 million) compared with the previous fiscal year. In the coming years, the government plans to leverage technology to improve crop outcomes for farmers with solutions such as satellite imagery, remote-sensing systems, drones, artificial intelligence, and machine learning to predict challenges that disrupt crop yields.