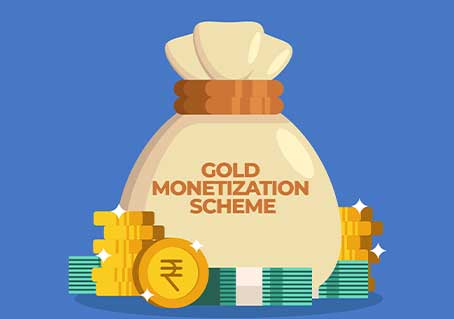 Introduction
In November 2015, the Indian government introduced the Gold Monetisation Scheme (GMS) to bring together gold held by households and institutions in the country and encourage its use for productive purposes, with an aim to reduce the country’s dependency on gold imports. Through GMS, the government revamped and linked together the existing Gold Deposit Scheme and Gold Metal Loan Scheme; allowed investors to earn term deposits, along with security and interest earnings, on their gold investments. In addition, the scheme enabled investors to save on gold storage costs and benefit from GMS deposit returns and thereby, relieved the government from bearing the cost of borrowing.

The scheme aims to encourage gold investments and unlock an estimated 25,000 tonnes of privately held gold stocks worth >US$ 1.5 trillion, most of which is stored idle in lockers across the country.

Need for GMS
According to the World Gold Council Report, the country’s gold demand stood at 974.8 tonnes in 2013, wherein a significant amount of gold was imported to meet this demand. Between 2009-10 and 2012-13, gold imports accounted for ~30% India's trade deficit. To reduce the trade deficit, in 2013, the government implemented high excise duties and import payment restrictions to curtail gold imports. This resulted in temporary drop in gold imports; however, led to an increase in gold smuggling.

Despite the government's efforts to limit gold imports, in 2014, India’s gold demand was the largest in the world at 842.7 tonnes, which accounted for 26.2% of the global gold demand. Following this, a report by WGC indicated that, in 2014, the amount of gold held in India stood at ~21,000 tonnes, worth >Rs. 52 lakh crore (US$ 7.12 billion), that was stored idle in households and temples. Of the total estimated gold, Indian temples held ~3,000-4,000 tonnes, with most gold sitting idle in the temple vaults.

With this, the government realised that tapping the gold stored within the country and restricting gold imports were the key parameters to address the country's excessive demand for gold.

Moreover, eight months after the commencement of GMS, as of July 2016, the government collected ~3.1 tonnes of gold from temples and households, where temples—as opposed to households—had contributed to the majority of this collection.

To strengthen the GMS, the government amended the scheme in February 2021 to transform banks and large jewellery retailers into BIS-certified gold collection centres and therefore, encourage domestic gold to enter the GMS system.

In February 2021, the Ministry of Finance approved amendments to Gold Monetisation Scheme and Indian Gold Coin Scheme, with the goal of making these schemes simpler, more appealing, and more successful. The revised GMS offers the following options to investors:

In the revised GMS, the minimum deposit limit has been lowered from 30 grams to 10 grams, with no maximum limit, allowing a wider range of people to open gold deposit accounts.

In addition, investors would earn 2.25% interest on medium- and long-term gold deposits within 5-7 years and 12-15 years, respectively.

Increased participation of banks and jewellers

The revised GMS allowed all banks (public sector banks and private banks) and jewellers to participate in the scheme and offer it on demand. This move was considered to be a significant step to improve the scheme's ability to tap privately held gold stocks more efficiently. Moreover, this is likely to augment the use of domestic gold stocks to meet the domestic manufacturing sector’s demand for precious metals and boost the availability of gold metal loans for the jewellery industry.

The revised GMS aimed to incentivise jewellers by allowing them to participate as ‘Gold Mobilisation Agents’ and ‘Collection and Purity Testing Centres’ (CPTCs). This move will benefit jewellers by creating additional revenue streams. Also, the extended participation of jewellers is likely to drive their existing customers into the scheme, making GMS more accessible and boosting its adoption.

The Road Ahead…
Since its launch in November 2015, the gold monetisation scheme posted significant growth. In FY21, through gold schemes (including GMS, gold bonds and sovereign coins), the estimated procured gold and its equivalent, by the government stood at Rs. 20,227 crore (US$ 2.77 billion), 5x higher than Rs. 3,870 crore (US$ 529.55 million) the amount collected in FY20.

In 2021, the government’s move to revamp the GMS addressed strategic areas—such as increased bank participation, dematerialisation of medium- and long-term gold deposit certificates and incentivise jewellers to engage—to make it more accessible and affordable.

Mr. Colin Shah, Chairman, GJEPC, stated that the government’s move to modify the GMS is likely to enhance gold trade. He added, “As there would be local gold in the system, the country’s reliance on gold imports will be significantly reduced.” As per the Gem & Jewellery Export Promotion Council (GJEPC), imports of gold bars decreased by 80.78% between April 2020 and March 2021 at US$ 1.5 billion, as against US$ 7.8 billion between April 2019 and March 2020. He anticipates that the percentage of gold imports will gradually decrease by 30% over the next three years (until 2023), helping India reducing its reliance on gold imports.