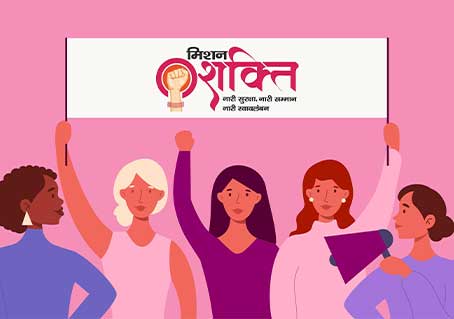 Overview of Mission Shakti Yojana
Women and children accounted for 67.7% of India’s population as per the 2011 census. For sustainable and equitable development of the country, it is crucial to empower, protect and ensure wholesome development of women and children. Through its numerous missions, the Ministry of Women and Child Development works hard to achieve this objective by promoting social & economic empowerment of women and ensuring care, development and protection of children.

As per the Ministry, Mission Shakti comprises schemes and policies that will help empower and protect women. In addition, under the Union Budget FY21-22, the government allocated Rs. 3,109 crore (US$ 415 million) for this mission.

Schemes implemented under the Nirbhaya fund:
The Indian government established the Nirbhaya fund to implement numerous schemes and projects to enhance safety and security of women. Under this framework, the Ministry of WCD implemented schemes such as One Stop Centre for women affected by violence, Women Helpline and Mahila Police Volunteers. These schemes are described as follows:

Swadhar Greh:
This scheme was introduced to aid rehabilitation of women, who have been victims of unfortunate circumstances, and help them lead their life with dignity. It aimed to provide shelter, food, clothing, medical assistance and economic & social security to women in distress including widows, destitute women and elderly women. As of March 2020, 73,745 women have benefitted from this scheme in the last five years.

Ujjawala:
The government launched a comprehensive scheme to prevent trafficking of women and children. The objectives of this scheme is to prevent, rescue, rehabilitate, reintegrate and repatriate victims of trafficking. To achieve this objective, the government planned to involve local communities, create public awareness through varied programmes and generate public discourse through workshops/seminars. As of March 2020, 28,409 victims have benefitted from this scheme in the last five years.

Working Women Hostel:
This scheme was introduced to provide safe and affordable accommodation, along with day care facilities, to working women. Through this scheme, the government aimed to facilitate services in urban, semi-urban and even rural areas that provide employment opportunities to women. The scheme will also assist projects such as construction of new hostels, expansion of existing hostels and operations of hostels on rented premises. As of March 2020, there were 73,387 working women in hostels and 10,788 children in day care centres.

Mahila Shakti Kendra:
The government introduced the Mahila Shakti Kendra (MSK) scheme to empower rural women through community engagement. Through this scheme, the government aimed to create an environment to help rural women realise their full potential by introducing support schemes/programmes and facilitate health, nutrition, skill development, employment and digital literacy. The scheme was introduced in 2017 and implemented across 115 most backward/aspirational districts, wherein student volunteers played an instrumental role in generating awareness about government schemes and social issues. To achieve this, the government created a framework across national, state, district and block levels.

Pradhan Mantri Matru Vandana Yojana (PMMVY):
Launched in 2017, the Pradhan Mantri Matru Vandana Yojana is a maternity benefit programme, which provides a cash incentive of Rs. 5,000 (US$ 66) to pregnant women and lactating mothers (excluding those who are employed with the central/state governments/or are in receipt of similar benefits under any law in force). This incentive is provided for the first living child of the family fulfilling specific maternal and child health conditions. In addition, the compensation will be given in three instalments of Rs. 1,000 (US$ 13), Rs. 2,000 (US$ 26) and Rs. 2,000 (US$ 26). As of March 2020, 1.75 crore women availed the PMMVY scheme. Between FY18-21, a total sum of Rs. 5,931 crore (US$ 785 million) was paid to the beneficiaries.

National Creche Scheme (earlier named as Rajiv Gandhi National Creche Scheme):
Through this scheme, the government aimed to provide day care facilities for children (aged from 6 months to 6 years) of working mothers. The scheme provides a package of integrated services such as day care facilities, including sleeping facilities; early stimulation for children (aged <3 years) and pre-school education for children (aged 3-6 years); supplementary nutrition (from local sources); monitoring growth and conducting health check-ups and immunisation. As of March 2020, 6,453 creches were functional in India.

Beti Bachao Beti Padhao (BBBP) Scheme:
The BBBP scheme completed six years of its launch in January 2021. Through this scheme, the government aimed to address the decline in Child Sex Ratio (CSR) and other issues related to women empowerment. In addition, the scheme was focused on generating awareness about the rights of a girl child through community engagement, stopping sex selection at birth and encouraging positive action to support their education growth and development. According to the Health Management Information System (HMIS), the Sex Ratio at Birth (is a monitoring parameter to record the progress of this scheme) improved by 16 points from 918 (2014-15) to 934 (2019-20). Of the 640 districts covered under the BBBP, 422 districts posted improvement in SRB from 2014-15 to 2018-2019.

Overview
In October 2020, the UP government launched the ‘Mission Shakti’ programme to create awareness about women empowerment in the state. The six-month long campaign, which will last from Shardiya Navratri to Chaitra Navaratri in April 2021, is aimed to provide safety and security to women in the state.

After facing flak over a string of rape incidents in UP, Chief Minister Yogi Adityanath stated during launch that ‘Mission Shakti’ will focus on ensuring safety and dignity of women and girls. He also gave a stern warning to perpetrators that crime against women will be dealt with an iron hand. He added that the campaign’s launch, which coincided with commencement of the ‘Navratri’ festival that is dedicated to Goddess Durga, is a tribute to the woman who died after allegedly being raped by two men in Balrampur, and further asserted that his government has zero tolerance towards crime against women and girls.

2021 Key Initiatives under Mission Shakti in UP

Second Phase of Mission Shakti to Commence from April 2021 in UP
For the second phase, the state government directed all district magistrates to prepare and submit a roadmap for the Women Welfare Department by March 31, 2021. Under the campaign, ~7.06 crore people have been made aware about women issues, including >4.27 crore women and >2.78 crore men as of February 2021.

According to senior officials, in the second phase of the ‘Mission Shakti’ programme, technological advancements are likely to be leveraged to help prevent crime against women and lower the reaction time for enforcement agencies to reach and help women in an emergency. Moreover, the state government implemented the following initiatives:

In 2018, ‘Mission Shakti’ was accorded the status of a directorate under Orissa’s department of women and child development. In March 2021, Odisha’s cabinet approved the state government’s decision to create a separate department of ‘Mission Shakti’ and bring The Mission Shakti Directorate, OLM (Odisha Livelihoods Mission) and the State Urban Development Agency together, as they work primarily for women SHGs and avoid dual federating units. Mission Shakti has the clear objective of empowering women through gainful activities by providing credit and market linkage. Promotion of Women's Self-Help Groups (WSHGs) has therefore been adopted as a key strategy for achieving women's empowerment. As of March 2021, ~70 lakh women have been organised into 6 lakh groups in all blocks and urban local bodies of the state.

Vision and Mission of Mission Shakti
Mission Statement: “Help construct a society that is self-reliant, conscious of socioeconomic issues, where there is a spirit of cooperation, where women are appropriately skilled to undertake their choice of activities without hindrances or dependence, where there is leadership development, while maintaining gender equity and above all, each respecting values of others and striving for the good of the greater society.”

Vision: Mission Shakti aims to make Odisha a land of equal opportunities where women are empowered to live with dignity and enjoy economic prosperity.

Conclusion
For any society to flourish and achieve prosperity, safety, security and dignity of women are of paramount importance; therefore, it is crucial to create an inclusive society where women and girls have equal access to resources and opportunities, enabling them to participate and contribute in social, economic and political development of that society as a whole.

Through Mission Shakti, the Indian government has taken the right step towards empowering women & girls and addressing issues related to their rights, legal provisions and limited awareness about government schemes and policies. Moreover, policymakers are now giving priority and focusing on resolving issues such as reducing excess mortality of girls and women, eliminating gender disadvantages in education, helping them access economic opportunities and thus, earnings and productivity, giving them an equal voice in households & societies and limiting transmission of gender inequality across generations.