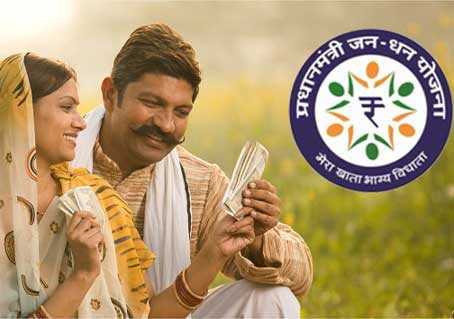 Introduction
Launched in 2014, Pradhan Mantri Jan Dhan Yojana (PMJDY) aims to connect every household (later refocused to every unbanked adult) of the country with the banking system. The scheme’s main objective is to help citizens receive banking services such as credit, pension and insurance at a reasonable cost.

Initially, the scheme was targeted for four years until 2018, covering every households; however, after understanding the impact and prospect, the govt. has extended the scheme to cover every adult.

Need for Pradhan Mantri Jan Dhan Yojana
Financial inclusion is critical for poverty reduction as this helps in transferring the benefits of economic growth and development to the lowest strata of the population. Limited access of financial services among citizens also obstructs economic growth as it limits the new initiatives and developments.

While India had focused on financial inclusion in the past, its success was limited. Before 2014, only 50% adults had bank accounts. As per World Bank estimates, in 2014, India had 469 million bank accounts despite a population of >1.2 billion. Also, a majority of labourers working in the unorganised sectors and households below poverty line did not have bank accounts.

These limitations resulted in lukewarm success of government schemes in extending basic financial support to households and hence, the PMJDY was launched with renewed focus and objective to ensure maximum coverage of banking services across the country and demographics.

PMJDY Objective
Key objective of the PMJDY is to ensure access of financial services such as basic savings & deposit accounts, insurance, pension, credit and remittance to all households at an affordable cost.

Creating a pull for opening bank accounts among the underserved population was a key challenge and to overcome this, the govt. focused on bottlenecks that restricted citizens from opening accounts. These bottlenecks include a long list of required documents, bank criteria of minimum balance in accounts (otherwise the account holder will pay account maintenance charge) and limited banking infrastructure availability.

The govt. has developed policies for these bottlenecks, which has resulted in higher adoption of the scheme and opening of new accounts.

Progress Update
As of March 2021, about 422 million accounts have been opened across different banks under this scheme. Banks have distributed 309 million RuPay debit cards to PMJDY accountholders and over Rs. 1.46 trillion has been deposited in these accounts.

Although India has made efforts towards financial inclusion in the past, the key challenge was to keep these accounts active and ensure adequate consumer transactions. To counter these challenges, the PMJDY scheme includes provisions and links such as subsidy transfer, insurance and pension, which are supporting operations of these accounts. The bank accounts opened under PMJDY also helped the govt. in transferring COVID-relief funds directly to beneficiary accounts.

Under the PMJDY, the aim is to create consumer interest in banking and improve the BFSI infrastructure. The PMJDY encourages use of banking by linking several govt. facilities with these accounts.

The govt. has also ensured the availability of banking agents in fixed points in each service area. This helped consumers access services as per their needs.

Another factor that contributed to the success of the scheme is simplifying account opening. Limited documentation and single form were the only requirements to open accounts under the PMJDY scheme. People with no ID documents can also open accounts with limitations of deposits, credit and withdraw limit.

Pradhan Mantri Jan Dhan Yojana List of Documents for Account Opening
Proof of Identity and Address, which include:

Note: If above documents are not available, and individual is in low-risk category of banks, any of the following documents can be accepted:

Key Enablers of the Scheme
To ensure successful implementation of the scheme, the govt. focused on streamlining the banking system by institutional collaboration and alignment of govt. departments with the scheme’s objectives.

Govt. departments such as the prime minister’s office (PMO) involvement was high since the scheme roll-out. Central govt. is the primary shareholder in large public-sector banks (PSBs) as well as the main sponsor of the scheme, which helped implement and execute the scheme across PSBs in the country. The scheme’s progress is monitored by the PMO through weekly video conference meetings with senior bureaucrats overseeing the programme. All banks are required to participate in these meetings and give presentations on numbers, key issues being faced and possible solutions.

The other factor which contributed to the scheme’s success is presence of large banking systems in the country. The Indian banking system is one of the largest in the world, comprising 12 public-sector banks, 22 private-sector banks, 45 foreign banks, 56 regional rural banks and numerous smaller cooperative banks. The scheme was channelled through all these institutions with the same requirements and offerings. This helped create unified communication with consumers and increase reach of the scheme.

While all banks participated in the scheme, PSBs are the flag bearers with the highest share of accounts and deposits under the scheme. As of 2020, PSBs accounted for 65% of all banking assets and about 78% of all PMJDY deposits.

Also, the large scope of the scheme required an infrastructure which can sustain the KYC mandate. Availability of online biometric-based and digitally verifiable national identification system helped banks expedite account openings under the PMJDY. This infrastructure also helped in identifying the redundancies and ghosts to ensure the authenticity and credibility of services offered through these accounts.

Conclusion
Success of the scheme is evident from the data of households linked by bank accounts. As of 2021, about 100% households in India are connected to the banking system, which helped them receive benefits of various govt. schemes directly into their accounts. Also, linking the scheme with other govt. services and facilities have helped in high transactions and low dormancy of the PMJDY accounts.