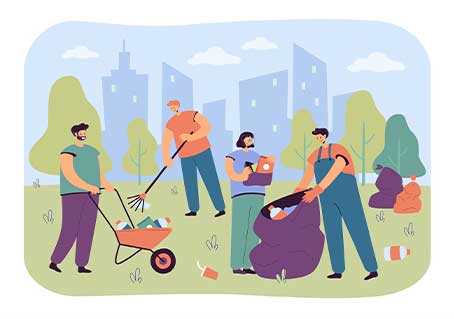 Brief Introduction of the Policy
On October 2, 2014, the Swachh Bharat Mission was launched by Prime Minister Narendra Modi to improve focus on hygiene and achieve universal sanitation across the country. Phase 1 of the mission was implemented as a nationwide campaign, aimed at eliminating open defecation in rural areas from 2014 to 2019 through mass-scale behavior change, construction of household-owned and community-owned toilets and implementation of techniques for monitoring toilet construction & usage.

Need for the Policy
India faces two major challenges – waste generation & management and lack of access to a basic sanitation facility such as a toilet. As per Tata Strategic estimates, India produces ~54 million tonnes of solid waste every year and as per UNICEF India, about 564 million people defecate in the open. According to a World Bank study, absence of toilets and conventional sanitation cost the country 6.4% of its GDP in 2006.

Prior to the Swachh Bharat Mission, programmes such as Total Sanitation Campaign and the ‘Nirmal Bharat Abhiyan’ existed, but were supply driven (wherein NGOs were tasked to construct toilets). As the focus was on the number of toilets constructed, no attention was given to the quality of toilets constructed or bringing about a change in human behaviour. Therefore, some households that started using toilets slipped back to defecating in the open.

Policy Details
The Nirmal Bharat Abhiyan was integrated into the Swachh Bharat Mission. A National Scheme Sanctioning Committee (NSSC) is constituted under the mission for specific periods to approve or revise the action plans. A five-tier implementation mechanism was set up at the national, state, district, block and village levels.

The objectives in this phase of the Swachh Bharat Mission were as follows:

Phase II: With successful completion of the first phase, the central government recommenced its work towards sanitation and hygiene status in rural areas with the approval of Phase II of the programme. The mission will be implemented from 2020-21 to 2024-25, with a total estimated outlay of Rs. 140,881 crore (US$ 19.11 billion), focusing on the sustainability of eradicating open defecation and solid & liquid waste management (SLWM).

Objectives of the second phase of Swachh Bharat Mission are as follows:

Swachh Bharat Mission Urban Areas
Launched in October 2014, the Swachh Bharat Mission Urban Areas includes elimination of open defecation, eradication of manual scavenging, municipal solid waste management, conversion of unsanitary toilets to pour flush toilets and bringing about a behavioural change in people (towards adopting healthy sanitation practices). The programme has been implemented over a five-year period in 4,401 towns. The mission aims to cover 10.4 million households by providing 0.25 million community toilets, 0.26 million public toilets and a solid waste management facility in each town. Under the programme, community toilets are built in residential areas where it is difficult to construct individual household toilets. Public toilets are constructed in designated locations such as tourist places, markets, bus stations and railway stations.

Swachh Vidyalaya Abhiyan
The Swachh Vidyalaya Programme was launched by the Ministry of Human Resource Development under Swachh Bharat Mission. The programme aims to provide separate toilets for boys and girls in all government schools within one year. The ministry financially supports states and union territories to provide toilets for girls & boys in schools under the Sarva Shiksha Abhiyan (SSA) and Rashtriya Madhyamik Shiksha Abhiyan (RMSA).

Rashtriya Swachhata Kosh
The Swachh Bharat Kosh (SBK) was set up to facilitate and channelise contributions and corporate social responsibility (CSR) funds to achieve the objectives of Swachh Bharat Mission by 2019. The SBK was also used to achieve the objective of improving cleanliness levels in rural and urban areas including schools. To incentivise contributions from individuals and corporates, tax rebates were given wherever possible.

Conclusion
According to an estimation of the Toilet Board Coalition, the sanitation economy (a robust marketplace of products and services, renewable resource flows, data and information that is sustainable, innovative, cost saving and revenue generating) of India is set to grow until US$ 62 billion by 2021. The Swachh Bharat Mission is a revolutionary change in the country’s sanitation drive. This flagship movement has led to a significant increase in the demand for construction and usage of toilets. It has also opened numerous windows of opportunities for stakeholders and sanitary market players.