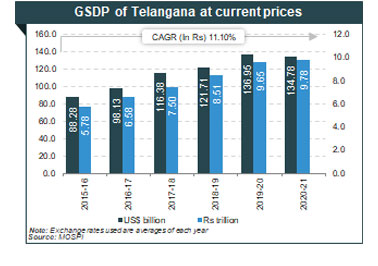 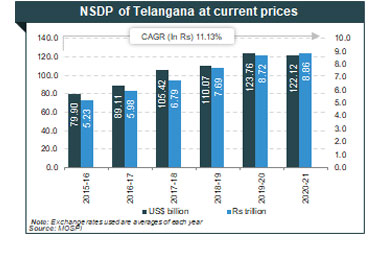 Telangana was formed in June 2014 with Hyderabad as its capital. The state was formed as a result of the split of erstwhile Andhra Pradesh state. The state holds an advantage as it possesses readymade capital with necessary infrastructure and ecosystem. Hyderabad was ranked second among the top 20 global cities in JLL’s City Momentum Index (CMI) 2019.

In 2019, domestic tourist arrivals in the state were 83.03 million and foreign tourist arrivals crossed 0.32 million. While in 2020, domestic and foreign tourist arrivals in the state dropped to 35.0 million 0.05 million, respectively. The government has conducted a study to prepare comprehensive district tourism development plans and identified 477 tourist destinations for upgrading existing tourist amenities/facilities. The erstwhile districts identified with the most number of proposed tourist destinations are Hyderabad (41), Rangareddy (26), Nalgonda (23), Adilabad (21) and Suryapet (21).

As of October 2020, Telangana had 34 operational SEZs, 56 notified SEZs and 63 formally approved SEZs.

According to Department for Promotion of Industry and Internal Trade (DPIIT), between October 2019 and March 2021, FDI inflow in Telangana stood at US$ 1,835 million.

Total merchandise exports from the state stood at US$ 7.35 billion in 2019–20. Export stood at US$ 8.71 billion in FY21. The state ranks 6th in export preparedness (2nd among landlocked states), according to NITI Aayog's Export Performance Index Report 2020.

Some of the major initiatives taken by the government to promote Telangana as an investment destination are: