Textiles have been one of the oldest and largest industries in India historically, second only to agriculture, and it generates jobs for millions of people. The current estimated value of the Indian textile industry is approximately US$ 120 billion and is expected to reach US$ 230 billion by 2020.

Typically, the mention of textiles in ancient and medieval India can be found depicted in sculptures or in literature. The earliest archaeological evidence that points to the existence of a textile industry is from the Indus valley civilization, approximately in 3000 BCE. Although there are no preserved fragments from this time period, items like spindles and needles were recovered.

In the olden days, the mesmerising colours and high quality of Indian textiles attracted connoisseurs from all over the world. During the reign of Alexander the Great, the Greeks wrote about gold embroidered robes and muslins that they had seen in India. At the beginning of the Christian era, Indian silk was extremely popular in Rome. Cotton products from Gujarat dating back to the 5th century AD were found in the tombs at Fostat, Egypt. In fact, cotton textiles were also sent to China during the peak of the silk route trade days. In the 13th century, south India also started exporting silk fabrics to Indonesia. Well before the Europeans step foot here, India had been exporting printed cotton fabrics to foreign countries.

As Indian textiles rose in popularity, these fabrics were exported to countries around the world through different trade routes. Some of the ancient trade routes include:

Why is India one of the leaders in global textile exports?

India has been one of topmost leaders of textile exports in the world for quite a few centuries now. A massive capacity for textile production, huge domestic market, and large pool of cheap skilled as well as unskilled labour, entrepreneurial skills, low import, affordable raw materials, and flexible manufacturing systems are some of the strengths of the Indian textile industry.

These strengths contribute towards the leadership of India in the global textile exports, but there are factors holding the industry back as well. Some of the weaknesses include poor supply chain management, use of outdated technology, and high production cost.

India is recognised as the second best supplier of textiles in the world. With 40 per cent of the global textile exports, China enjoys the first position, while India comes in second at 5 per cent. Although India has seen a decline in its export share, it still has the potential to reach the top because the country has labour laws that are more favourable as compared to those in China.

The launch of the ‘Make in India’ initiative has brought the focus back on textile exports and is likely boost India’s ranking in the global textiles exports. The main goal of this initiative is to achieve a 20 percent share of the global textile trade by 2024-2025. The government has devised a 10-point strategy to achieve this goal; some of them include further reforming labour laws, diversification of exports, and promoting innovation and R&D.

The textile exports from India contributed revenue of US$ 40 billion in the fiscal year 2015-16 as opposed to the target of US$ 48 billion. The primary reasons for this slip-and-miss were competition from Bangladesh and Vietnam as well as less demand from EU, US, and China. Keeping this in mind, the government has set a target of US$ 45 billion exports for the fiscal year 2017-2018. The Indian government is expected to unveil INR 170 crore package for the knitwear sector in the near future. For all intents and purposes, it looks like India is all set on to become the largest supplier of textiles in the world. 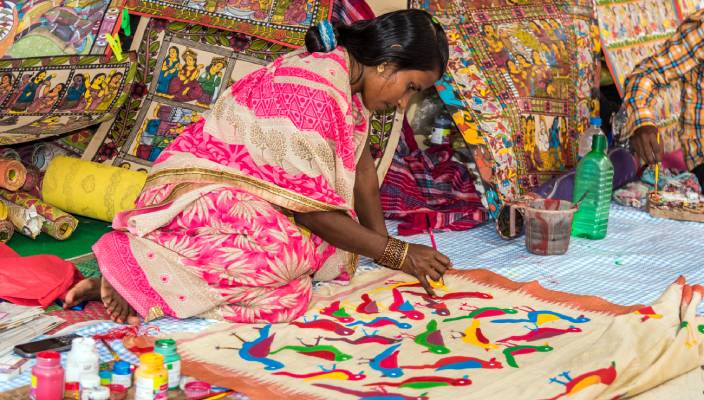