In India, the use of drones has been gradually rising in various applications, especially in non-commercial applications for aerial cinematography, land surveys, agriculture & mining activities, disaster management, construction activities and mapping national highways and railway tracks. According to a July 2021 report by BIS Research, the global drone market, which is currently dominated by the US, China and Israel, is estimated to reach US$ 28.47 billion in FY21-22, with India likely to account for 4.25% share.

Drones have recorded increased adoption in the recent years owing to its widespread capabilities—from simple photography to surveillance, monitoring roads & railway lines and even delivering essentials/food items to customers. Moreover, even amid the ongoing COVID-19 pandemic, drones played a crucial role in carrying out a host of activities—from surveillance and sanitisation to temperature checks and public broadcasting—across the country. This not only helped in minimising the risk of virus spread, but also helped authorities in ensuring the safety of healthcare and police personnel. 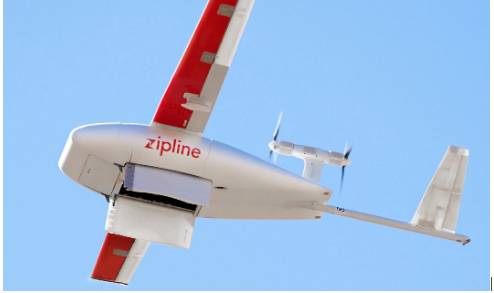 Image Courtesy – Economic Times
New liberalised drone policy – Drone Rules 2021
Realising the immense potential of drones, which can substitute humans to perform difficult and time-consuming tasks, on August 26, 2021, the Indian Government released ‘Drone Rules, 2021’, which comprised major upgrades of the existing drone norms. The new regulations enabled commercial usage of drones, granted drones a legal status and made the market more liberal & conducive for its application in various segments; thus, boosted drone businesses in India. The new policy is an improvised version of the Unmanned Aircraft System (UAS) Rules, March 2021, which required excessive licensing and permissions, wherein >10-12 licences were required for research & development, manufacturing, importing and operating drones; all this just failed to help the sector. Moreover, other mandates related to fines and technical requirements were also not favourable.

Through this new liberalised drone policy, the government aims to aid individuals and businesses leverage drone technology to its best. Some key enhancements of the new Drone Rules, 2021, policy are as follows: 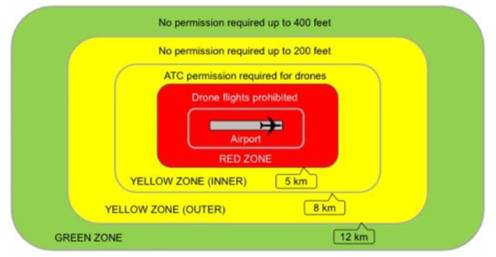 Liberalised policy to be a gamechanger for government and other sectors
In a recent September 2021 interview with Moneycontrol, Chief of the Drone Federation of India, Mr. Smit Shah stated that on the back of the new policy, India’s drone market is expected to reach Rs. 50,000 crore (US$ 6.69 billion) in five years and Rs. 30,000 crore (US$ 4.01 billion) in the next three years. Following this, the Minister of Civil Aviation Mr. Jyotiraditya Scindia applauded the new drone laws and stated that air taxi can be a reality in India soon, since drones weighing up to 500 kgs have now come under the ambit of the new drone policy, which used to be 300 kgs under the previous regime. He also added that the Defence Ministry, the Home Ministry and BCAS (Bureau of Civil Aviation Security) are planning to work in the direction by leveraging the "counter rogue drone technology". Mr. Smit Shah also suggests that drones can be helpful in transporting lifesaving drugs and vaccines in rural areas. In September 2021, Telangana had tested drones to deliver COVID-19 vaccines. It was the first state to conduct an experiment in this direction and was successful in the same. As per an October 6, 2021, report, researchers at the Indian Institute of Science (IISc) are working towards launching drone skyways/corridors that will help in timely delivery of life saving drugs, vaccines and organs for transplant.

The government is already leveraging the power of drone technology in various development programmes. For instance, the SVAMITVA Scheme (Survey of Villages and Mapping with Improvised Technology in Village Areas) was launched in April 2020 to help Indian rural residents establish clear ownership of their properties by mapping land parcels through drones. The scheme benefitted >6,62 lakh villages, granting financial stability to the rural population and enabling them to use their land to complete transactions/avail loans. .

Another project in Telangana—'Hara Bahara’, a programme that aims to plant 1 billion trees by 2030—will be undertaken in partnership with a drone start-up called ‘Marut Drones’. Marut Drones' will use its "Seedcopter" drone for seeding in planned areas. For a similar project, drones were deployed by the Indian Forest Department to monitor plantation in Nagpur in 2018.

Domestic manufacturing to get fillip
While the new ‘Drone Rules, 2021’ being at par with international standards, the policy needs to be implemented immediately to reap the desired benefits. The value chain of the drone sector comprises hardware (drone manufacturer), software and service delivery. As India currently imports specific components from the US, China and Europe and only assembles the finished product domestically, it aims to manufacture indigenous drones and thereby, master the entire value chain. Following this, component manufacturing will gradually scale up on the back of liberalised drone laws and government policies such as production-linked incentive (PLI) schemes that boost local manufacturing.

PLI scheme to appraise the drone market value and boost manufacturing
The PLI scheme, which was launched in August 2021, envisages an outlay of Rs. 120 crore (US$ 16.06 million) spread over three years for drone manufactures. The PLI for a drone manufacturer will be capped at 25% of the total annual outlay. This scheme is expected to double the combined sales turnover of all domestic drone manufacturers in FY2021-22. The Civil Aviation Ministry estimates India’s drone sector to achieve a total turnover of Rs. 120-150 billion (US$ 1.63-2.04 billion) by 2026, from its current turnover of about Rs. 800 million (US$ 10.88 million). In addition, the government plans to attract investments of Rs. 5,000 crore (US$ 669.07 million) in the next three years in the drone manufacturing industry and create >10,000 job opportunities. The government is also encouraging start-ups and MSMEs (Micro, Small and Medium Enterprises) to invest in drone technology by easing the eligible annual sales bracket at a minimum level—Rs. 2 crore (US$ 267.63 thousand) for drones and Rs. 50 lakh (US$ 66.91 thousand) for drone components.

Attract investments and facilitate solid private sector participation
The new drone laws have started facilitating traction in the market, as numerous companies are partnering to disseminate technology knowledge and attract funds. For example, in June 2021, Swiggy, a food delivery platform, and ANRA Technologies Private Limited, an integrated airspace management firm, received a go-ahead from the Ministry of Defence, the Directorate General of Civil Aviation and the Ministry of Civil Aviation to begin trials for beyond visual line of sight (BVLOS) drone food deliveries in India. Following this, Swiggy partnered with Skylark to test its drone delivery operations. In July 2021, Info Edge Ventures and Indian Angel Network (IAN) fund invested Rs. 220 million (US$ 3 million) in Bengaluru-based Skylark Drones. 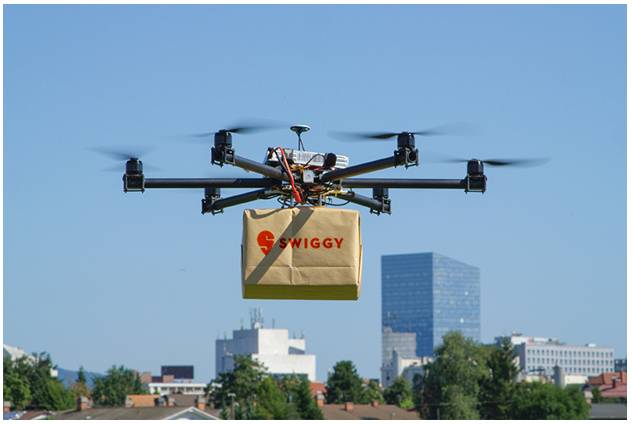 In August 2021, DCM Shriram Industries brought 30% shares of Zyrone Dynamics Havacilik Danismanlik Ve Ar-Ge San. Tic. A.S., a Turkish drone manufacturer. Both companies will work towards marketing drone in India and worldwide. Also, in August 2021, RattanIndia Enterprises invested in the US-based, Matternet, the world’s most extensive urban drone logistics platform. Under the deal terms, an Indian subsidiary will be formed to focus on the drone business in India.

Moreover, companies such as Tata Steel are deploying drones for various monitoring tasks. In June 2020, Zomato was exploring urban air mobility (UAM) technology to complete deliveries through drones. The company did not make any stark progress due to various regulatory hurdles in the drone business but may soon revisit the plan.

Conclusion
COVID-19 has certainly proven to be a catalyst for large-scale adoption of drones by government agencies in India. The liberalised norms have seconded to welcome the drone technology, surpassing the application of drones that were previously limited to government agencies alone. Companies involved in the drone industry in India are now breathing a sigh a relief since the government opened the economy to the drone market. More companies and start-ups are likely to gear up their investments in this sector. India is focusing more on being ‘Aatmanirbhar’ (self-reliant). With the waiver of pilot licenses, reduced formalities; launch of new drone corridors and incentivising local manufacturers, drones could change the scenario across various sectors in the country. 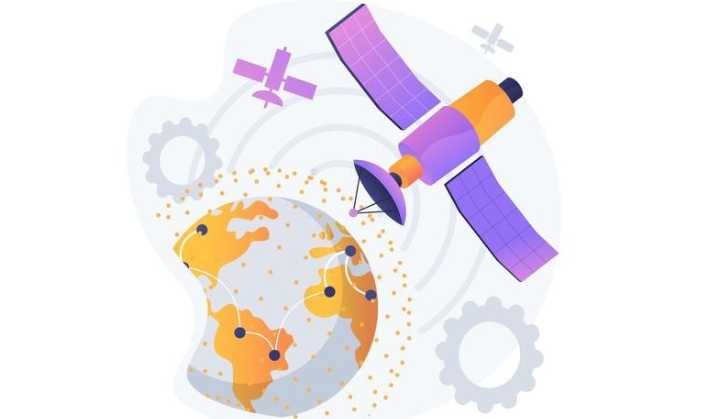