Manufacturing has emerged as one of the high growth sectors in India. Prime Minister of India, Mr Narendra Modi, launched the ‘Make in India’ program to place India on the world map as a manufacturing hub and give global recognition to the Indian economy. Government aims to create 100 million new jobs in the sector by 2022.

The Gross Value Added (GVA) at basic current prices from the manufacturing sector in India grew at a CAGR of 5% during FY16 and FY20 as per the annual national income published by Government of India. The sector’s GVA at current prices was estimated at US$ 397.14 billion in FY20PE.

Business conditions in the Indian manufacturing sector continue to remain positive. The manufacturing component of IIP stood at 129.8 during FY20. Strong growth was recorded in the production of basic metals (10.8%), intermediate goods (8.8%), food products (2.7%) and tobacco products (2.9%). India’s Index of eight core industries stood at 131.9 in FY20.

According to the Ministry of Statistics & Programme Implementation, India’s industrial output, measured by IIP, rose by 3.6% y-o-y in October 2020.

(Purchasing Managers’ Index) PMI fell from 58.9 in October 2020 to a three-month low of 56.3 in November 2020, signifying strong growth in the manufacturing sector, despite losing traction.

With the help of Make in India drive, India is on a path of becoming the hub for hi-tech manufacturing as global giants such as GE, Siemens, HTC, Toshiba, and Boeing have either set up or are in process of setting up manufacturing plants in India, attracted by India's market of more than a billion consumers and an increasing purchasing power.

According to the United Nations Conference on Trade and Development (UNCTAD), India ranked among the top 10 recipients of Foreign Direct Investment (FDI) in South Asia in 2019, attracting US$ 49 billion—a 16% increase from the previous year.

Cumulative Foreign Direct Investment (FDI) in India’s manufacturing sector reached US$ 89.40 billion during April 2000 March 2020. In May 2020, the Government of India increased FDI in defence manufacturing under the automatic route from 49% to 74%.

India has become one of the most attractive destinations for investment in the manufacturing sector. Some of the major investments and developments in this sector in the recent past are:

The Government of India has taken several initiatives to promote a healthy environment for the growth of manufacturing sector in the country. Some of the notable initiatives and developments are:

India is an attractive hub for foreign investments in the manufacturing sector. Several mobile phone, luxury and automobile brands, among others, have set up or are looking to establish their manufacturing bases in the country.

The manufacturing sector of India has the potential to reach US$ 1 trillion by 2025. The implementation of the Goods and Services Tax (GST) will make India a common market with a GDP of US$ 2.5 trillion along with a population of 1.32 billion people, which will be a big draw for investors. The Indian Cellular and Electronics Association (ICEA) predicts that India has the potential to scale up its cumulative laptop and tablet manufacturing capacity to US$ 100 billion by 2025 through policy interventions.

With impetus on developing industrial corridors and smart cities, the Government aims to ensure holistic development of the nation. The corridors would further assist in integrating, monitoring and developing a conducive environment for the industrial development and will promote advance practices in manufacturing. 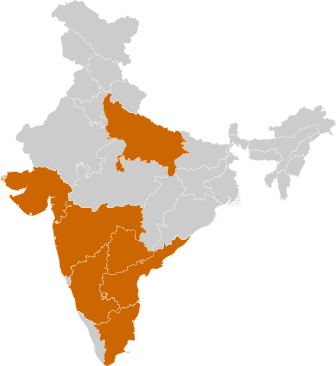 In the FY2021-22 Union Budget, the Government of India announced an ambitious divestment target...

Introduction
In March 2021, the Union Cabinet of India approved a memor...

Overview
The vehicle scrappage policy is a government-funded programme ...

Introduction
The ‘Smart City Mission' is a revolutionary proj...

Overview
The handloom and handicraft industry has been the backbone of ...

Overview
The government’s objective to strengthen the healthcare ...