Overview – The Indian space sector
The Indian space sector has been globally recognised for building cost-effective satellites, launching lunar probes and taking foreign satellites to space. The global space economy is estimated at ~US$ 423 billion. Currently, India constitutes 2-3% of the global space economy and is expected to enhance its share to >10% by 2030 at a CAGR of 48%. 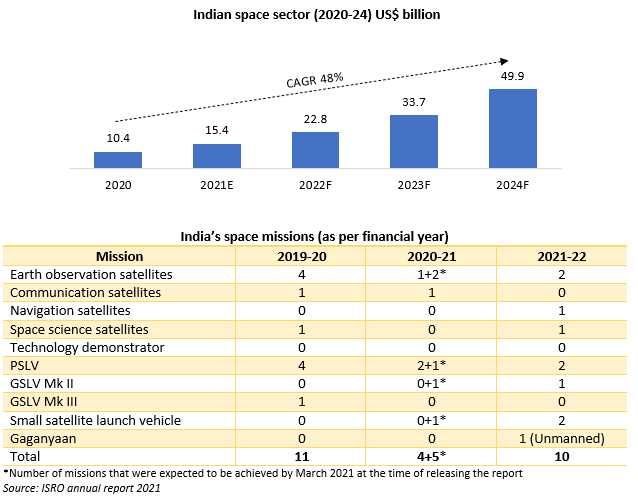 According to Prime Minister, Mr. Narendra Modi, upcoming government policies will enable commercialisation of space technology and boost private investments in the sector. These reforms will focus on innovations in the private sector, helping the government act as an enabler, preparing the youth for the future and ensuring that the space sector is used for the progress of humanity.

On June 26, 2020, the Government of India (GOI), in a historical decision, approved participation of private enterprises across all phases of space activities. The government also approved formation of the Indian National Space Promotion and Authorisation Centre (IN-SPACe)—that would act as part of the Indian Space Research Organisation (ISRO)—to help private players become independent actors instead of being solely vendors or suppliers.

Increasing participation of private enterprises in the Indian space sector:

Many Indian private companies and start-ups have been showing interest in space activities and services, as various government initiatives have been announced. According to a global report published in June 2021, India has 368 private space firms, making it fifth in the world after the US, the UK, Canada and Germany. With 368 private space firms, India is leading China (288), France (269), and Spain (206). According to ISRO’s Chairman, Mr. K Sivan, the number of private company proposals in the space sector has increased by 30% in 2021 from 22 proposals in 2020.

To boost participation of young people and students in the Indian space sector, NITI Aayog, in collaboration with ISRO and the Central Board of Secondary Education (CBSE), launched the Atal Tinkering Lab (ATL) space challenge as part of the Atal Innovation Mission in September 2021.

The GOI has been developing world-class learning facilities and space museums, where students can learn the basics of space technology, develop interests, and pursue careers in Science, Technology, Engineering and Mathematics (STEM). STEM is a relatively new term in the Indian education industry and helps develop critical thinking and problem-solving abilities among students.

According to Mr. K. Sivan, Chairman of ISRO, the GOI is expected to announce a revised foreign direct investment policy for the Indian space sector that would open huge investment opportunities for foreign companies. He also emphasised that with IN-SPACe, the government can establish a link between ISRO and private sector companies to utilise Indian space resources and increase space-based activities. Currently, all FDI investments must be cleared by the government, but the industry wants investments to be cleared through the automatic route.

ISpA will support the government’s vision of ‘Atmanirbhar India’ (self-reliant India) and ‘Make in India’ to become a leader in the global space industry. It would act as a single-window agency and open the Indian space sector to private enterprises and start-ups.

Encouraging the public sector to focus on research & development activities:

Transferring technologies developed by ISRO to industries for commercialisation:

A memorandum of understanding (MoU) was signed between the Department of Space (DoS) and NewSpace India Limited (NSIL) on October 12, 2020. This MoU will help the NSIL identify technologies developed by ISRO (that have the potential for commercialisation) and transfer it to external entities in the public & private sectors, academia and state & central government organisations. Under this agreement, as of October 2021, NSIL has transferred over 363 technologies for commercialisation.

An example of this initiative was seen when India was fighting the second wave of COVID-19, during which ISRO developed three types of ventilators and transferred the technology for clinical usage. Similarly, platforms such as Polar Satellite Launch Vehicle (PSLV) and Small Satellite Launch Vehicle (SSLV) have been identified for transfer of technology to the private sector.

Reliance on space assets has increased significantly over the past few years in multiple industrial sectors. ISRO has moved from a supply-driven model to a demand-driven model for maximum utilisation of space assets.

ISRO has opened its facilities to the private sector. It has allowed two satellites from the private sector and one from academia to be tested in the US Rao Satellite Centre, Bangalore, in February 2021. Further testing of the two satellites will take place at ISRO’s spaceport and rocket centre facilities in Sriharikota and Thiruvananthapuram. IN-SPACe is an independent nodal agency under the DoS to allow space activities and usage of ISRO-owned facilities by Non-Governmental Private Entities (NGPEs).

Process of sharing facilities through IN-SPACe:

Conclusion
Over the past two decades, private enterprises such as Virgin Galactic, SpaceX, Blue Origin and Arianespace have revolutionised the space sector by reducing costs and turnaround time in other spacefaring countries. However, in India, private enterprises have been limited to being merely suppliers to the government’s space programme.

Now, the Government of India strongly believes that optimal utilisation of space technology will revolutionise the delivery of governance services and enhance developmental efforts. The Indian space sector can potentially inspire the young populace with scientific curiosity and encourage them to pursue a career in STEM. Above all, the Indian space sector has an opportunity to create a vibrant ecosystem for start-ups and private enterprises. Being one of the few spacefaring countries, India is increasingly encouraging private sector participation through various reforms that are expected to help India achieve a market share of more than 10% in the global space sector by 2030.