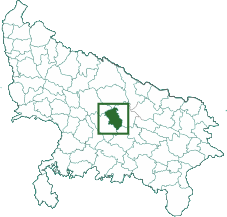 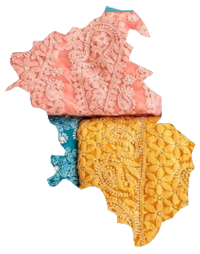 The Chikankari embroidery has developed over centuries, reaching its peak in the late 19th Century in Lucknow. The word “Chikan” steps from a Persian word derived from the Chic, which referred to the “Jali” work done on marble or wood. The craft is also well-known as “shadow work” or “white embroidery work”, traditionally practiced in Lucknow and its surroundings. From the middle of the 16th to early 17th century, the weavers borrowed motifs from manuscripts and illustrations. 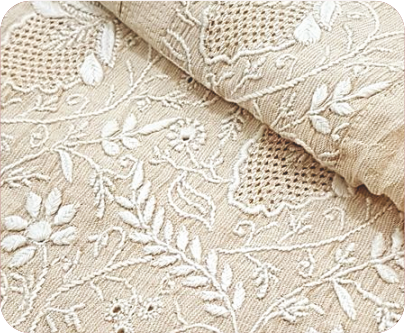 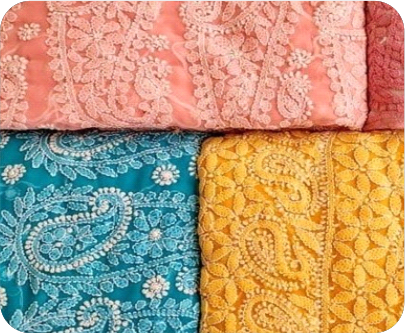 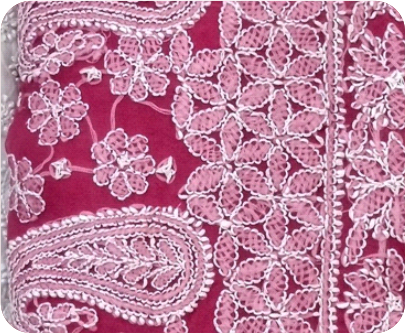 Complemented as one of the finest embroideries of the world with 32 different variations, the Lucknow Chikankari is known to transform the plainest fabric into flowing yards of magic filled with exquisite florals.

The patterns transferred onto a cloth from an intricately carved wooden block are skillfully executed by an embroiderer with simple and complex stitches giving an effect that is gentle and delicate.

Traditional Chikankari dress material was embroidered on muslin cloth with a white thread. Gradually the work was started on other fabrics like Organdie, Mulmul, Tanzeeb, Cotton, and Silk. The pattern is block printed on de-starched Chikankari Fabric using temporary dyes.

Chikan is a type of whitework, that is to say, white embroidery on white fabric, with predominantly floral designs executed on fine cotton with untwisted threads of white cotton, rayon, or silk. The most commonly used motif is that of a creeper. Particular floral motifs may garnish the entire garment or just one corner. Among the floral motifs embroidered, the most popular motif includes jasmine, rose, flowering stems, lotus, and the paisley.

About 40 different stitches are used for Lucknow Chikan embroidery. These embroideries are unique in their discipline in that each stitch is used for one purpose only.

Lucknow, the seat of the nawabs of Awadh, is home to several magnificent monuments. The 60 feet high Rumi Gate in Lucknow was constructed during the reign of Nawab Asafi-ud-Daula in 1784-86. It is said to be identical in design to an ancient portal at Constantinople in Turkey and is also referred to as Turkish Gate.

Husainabad Clock Tower is a clock tower located in the city of Lucknow. It was built in 1881 by Nawab Nasir-ud-Din Haider for the arrival of Sir George Cooper, the first lieutenant governor of the United Provinces of Oudh.

Bada Imambara’s central hall is said to be the largest vaulted chamber in the world. Except for the galleries in the interior, there is no woodwork in the entire structure.