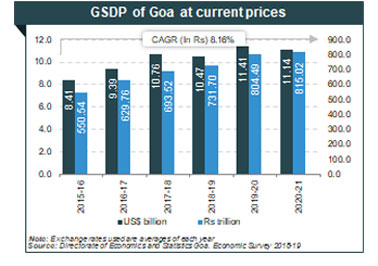 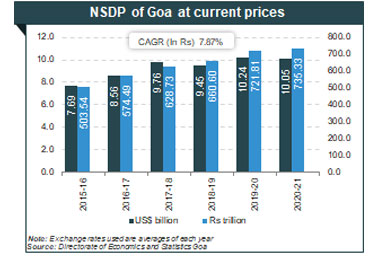 Goa is located in the western region of India. The state shares its border with the Arabian Sea to the west, Maharashtra to the north and Karnataka to the south and the east. It is one of the fastest growing states in the country. Goa has a coastline of about 104 kms and inland waterways of about 250 kms. The coast is full of creeks and estuaries formed by rivers.

Tourism is the largest segment in the services sector. Goa is traditionally known as a tourist paradise for its natural scenery, beautiful beaches and cultural diversity. For 2020-21, the state government has allocated Rs. 12,746 lakh (US$ 17.41 million) to the tourism sector.

In 2020, Goa witnessed arrivals of 876,358 domestic tourists and 282,022 foreign tourists. This was much lesser than the previous year due to COVID-19 restrictions.

Goa currently has a total of 38 operational mining leases with a reported production of 9.84 million tonnes in 2018-19. Exports of iron ore from the state reached US$ 184.54 million in FY21. Mormugoa Port (Goa) handled 1.19 million tonnes (MT) of the total iron ore traffic in April 2021.

According to the Department for Promotion of Industry and Internal Trade (DPIIT), between October 2019 and March 2021, FDI inflows in Goa stood at US$ 80.77 million.

Merchandise exports from the state reached US$ 2.30 billion between April 2020 and March 2021.

Following are some of the major initiatives taken by the Government to promote Goa as an investment destination: