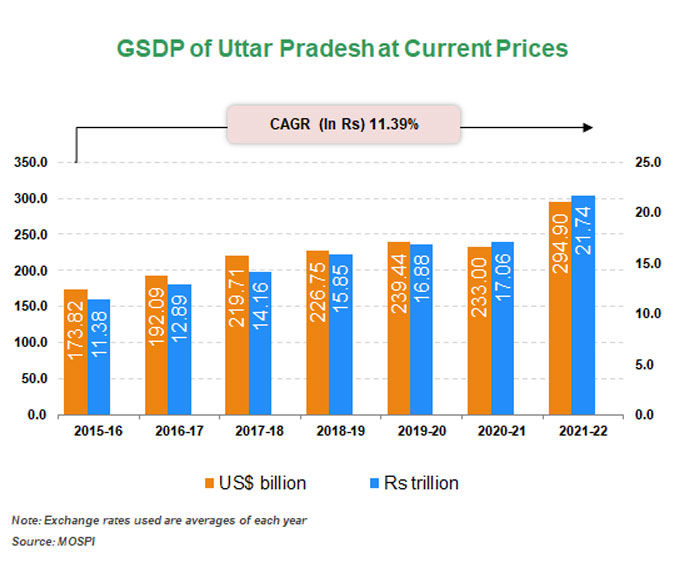 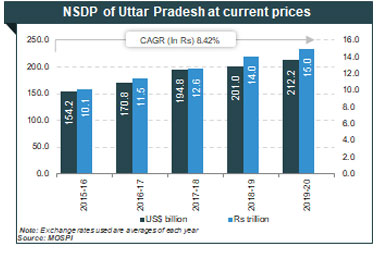 Uttar Pradesh is a favored tourist destination in India with Taj Mahal, one of the eight Wonders of the World, located in Agra. In 2019, domestic tourist arrivals in the state reached 535.8 million. Foreign tourist arrivals crossed over 4.74 million.

As of October 2020, Uttar Pradesh had 21 notified, 13 operational SEZs and 24 formally approved SEZs. The state offers a wide range of subsidies, policy and fiscal incentives as well as assistance for businesses under the Industrial and Service Sector Investment Policy, 2004 and Infrastructure and Industrial Investment Policy, 2012. The state has well-drafted, sector-specific policies for IT and biotechnology. The new Uttar Pradesh Civil Aviation Promotion Policy 2017 was brought to promote investment and trade in Uttar Pradesh and to promote tourism while increased road connectivity along with air connectivity will create more employment avenues.

The state attracted Foreign Direct Investment (FDI) equity inflow worth US$ 664.66 million between October 2019 and December 2020 according to the data released by Department for Promotion of Industry and Internal Trade (DPIIT). In 2019, 147 investment intentions worth Rs. 16,799 crore (US$ 2.40 billion) were filed in Uttar Pradesh.

Note: ^ - As per 3rd Advance Estimates