India is swiftly gearing towards a US$ 5 trillion economy by 2024. The country is rapidly developing to become a global powerhouse. India is home to a massive consumer base, and the working-age population is soaring. The global corporate arena is swiftly turning to the Indian talent pool due to several push-pull factors like the technique of problem-solving, digital literacy, relentless hard work and the ability to adapt to new technology. Transition is the law of nature, and Indian talent has the potential to circumvent this global transition.

Why is there a demand for Indian talent?

India has gained a well-deserved place in the global information technology sector. The UN Department of Economic and Social Affairs stated that India is the leading contributor in terms of talent to the world, with around 17.5 million Indians settled in various parts of the world. The country also has a low-cost advantage, which is 5-6 times less compared to the western countries. The reasons why Indians are preferred in various sectors are as follow:

Development of education in India

With the introduction of innovative technology such as smart classes and online education, the education sector has undergone revolutionary changes. According to Indian education data, the literacy rate for adults (15+ years) in India is 69.3%, with male literacy at 78.8% and female literacy at 59.3%. India is estimated to have more than 20 universities in the world's top 200 list by 2030 and be among the top five countries in terms of research output. Various steps taken by the Government to promote education are as follow:

The growth of Indian education system

According to the All India Survey on Higher Education Report of 2019-20, higher education in India has seen a surge of 11.4% in student enrolments. The gross enrolment ratio (GER) in higher education has surpassed the 27% mark. Surprisingly, the education landscape of India has diversified. Out of 1,043 universities listed on the All India Survey on Higher Education portal, 993 universities have specialized in various fields like agriculture, fine arts, language, law, management, medical, Sanskrit, science, technical, etc. 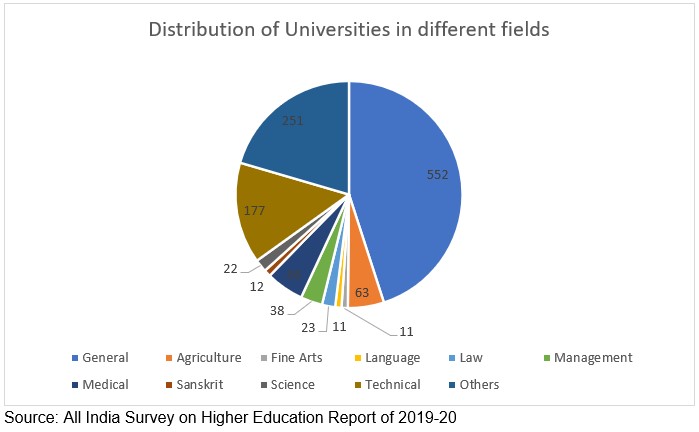 Universities around the country have started to focus on idea generation, critical thinking, global issues, and overall personality development. This development has led to the growth of entrepreneurship and skill enhancement in the country.

The profusion of talent in India

The Indian talent pool has slowly and steadily climbed up the corporate ladder worldwide. It has also played a pivotal role in advancing various technology powerhouses. Google, Mastercard, Pepsi and Microsoft are some of the largest companies where Indians have occupied key positions. Silicon Valley, the tech capital of the US, is home to some of the top companies across the globe. The top 15 firms in the Valley constituted almost 40% of tech employees and generated US$ 1.35 trillion in revenue in 2020. According to Gulf Today, around one-third of all engineers in the tech capital are of Indian origin, and approximately 10% of the world's largest tech companies have CEOs of Indian origin. Experts believe that the training and rearing of Indian managers can help in creating a pipeline of potential leaders. 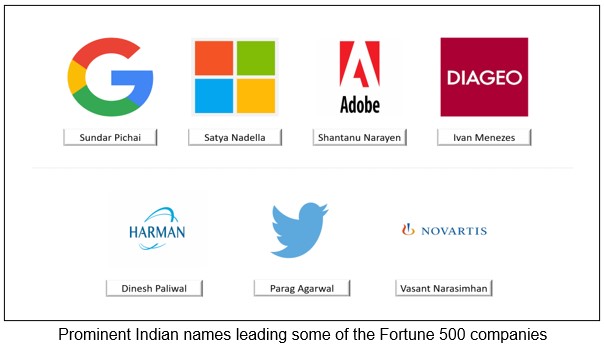 According to a book authored by Mr. Vivek Wadhwa, Indian-origin leaders have been known for transforming global companies from dominant, old, and aggressive traits to a culture where an organisation aims to create a comfortable environment for its employees.

India is at its nascent stage for Startup development. As per Startup Ranking, India has 12,336 startups, the second-highest globally. 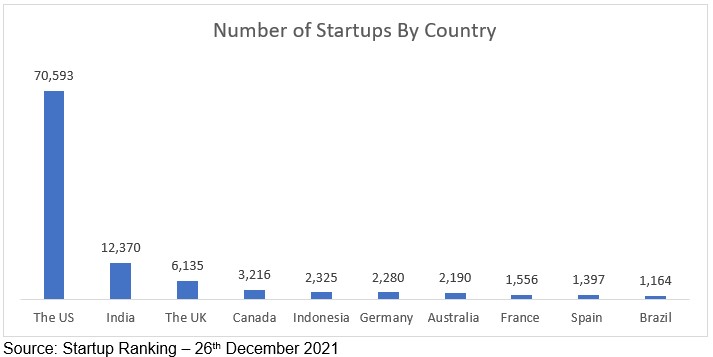 Indian startups have been offering innovative technology platform services to people locally and have started expanding to other markets. For instance, the homegrown ride haling platform, Ola Cabs, has expanded its services in Australia, New Zealand, and the UK. Hospitality service provider, OYO, has been expanding its footprint aggressively in the Asian markets. As of 2020, food delivery startup Zomato was operating in approximately 24 countries globally including India, the US, the UK, Australia, Canada, Sri Lanka, and South Africa. According to a survey conducted by Turningideas, 42% of India startups aim to go global in 2022.

India's rank in the global economy

The International Monetary Fund's World Economic Outlook estimates India's nominal GDP at approximately US$ 2.9 trillion in 2021, making it the sixth-largest economy in the world. India's share in the global GDP is close to 3.1%. A recent report released by the Bank of America states that India is projected to be the world's third-largest economy by 2031. India's imperative rise will be backed by three key drivers: India’s talent pool, rising financial maturity and development of mass markets. India’s talent pool has been constantly shaping the country’s economy as they bring in digital skills, enhanced talent and a plethora of ideas. Further, India's relationship with various international organisations will also function as a positive driver for the country's talent. International bodies like the World Trade Organization are some of the prominent partners of the country. The positive impact of the World Trade Organization on the Indian economy has been encouraging.

The road ahead for India

Businesses are driven from theories to virtuosity by people. A crucial investment that any country can make to accelerate their productivity is in its human resources, especially for a country that is producing start-ups at a significant pace. India needs to build a winning culture that fascinates and inspires the best and the brightest minds of the country to foster an environment that encourages inclusive growth. The world has gone digital and so have businesses. We can notice a massive talent dearth, specifically in the technology landscape, which has led to creation of tech giants, global banks, and multiple fast-growing startups. India’s talent pool will be a crucial asset to the world for achieving excellence.