* Increase in working population and growing disposable income will raise the demand for banking and related services.

* Mobile, internet banking and extension of facilities at ATMs will improve operational efficiency.

* RBI announced the launch of its first global hackathon 'HARBINGER 2021 – Innovation for Transformation' with the theme ‘Smarter Digital Payments’.

* Rising fee incomes are improving the revenue mix of banks.

* Wide policy support in the form of private sector participation and liquidity infusion.

In FY18-FY21, bank assets across sectors increased. Total assets across the banking sector (including public and private sector banks) increased to US$ 2.48 trillion in FY21.

RBI has decided to set up Public Credit Registry (PCR), an extensive database of credit information, accessible to all stakeholders. The Insolvency and Bankruptcy Code (Amendment) Ordinance, 2017 Bill has been passed and is expected to strengthen the banking sector. Total equity funding of microfinance sector grew 42% y-o-y to Rs. 14,206 crore (US$ 2.03 billion) in 2018-19.

Rising income is expected to enhance the need for banking services in rural areas, and therefore, drive the growth of the sector.

The digital payments revolution will trigger massive changes in the way credit is disbursed in India. Debit cards have radically replaced credit cards as the preferred payment mode in India after demonetisation. In January 2022, Unified Payments Interface (UPI) recorded 4.62 billion transactions worth Rs. 8.32 trillion (US$ 111.8 billion).

ICICI Bank ties up with Santander for India-UK business ease...

ICICI bank announced a tie-up with Santander bank in the UK, aimed at facilitating the banking requirements of corporates operating across both India and the UK.

FidyPay has partnered with Yes Bank to provide digital facilitation to a variety of businesses, including SMEs, fintech companies, and start-ups.

Bank credit growth stood at 9.6% in FY22 compared to 5.6% in FY21, with retail lending being the driving force behind this growth. 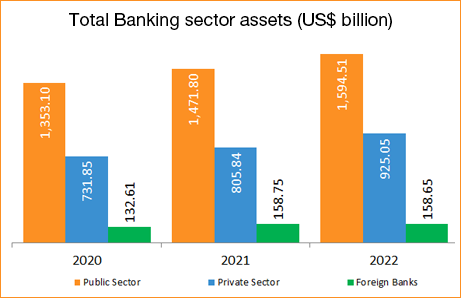 India will contribute 2.2% to the world's digital payments market by 2023, while the value of such transaction is expected to reach US$ 12.4 trillion globally by 2025.