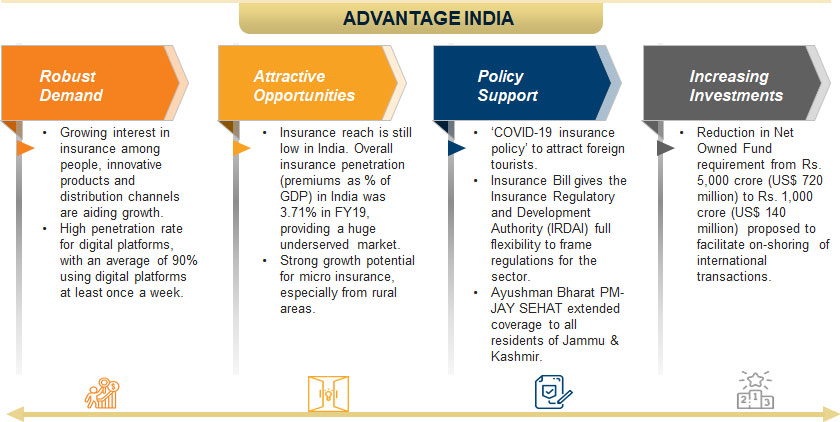 The Government has approved an ordinance to increase Foreign Direct Investment (FDI) limit in the Insurance sector from 26% to 49%, which would further help attract investment in the sector. As per Union Budget 2019-20, 100% FDI was permitted for insurance intermediaries.

Over 53.8 million farmers benefitted under the Pradhan Mantri Fasal Bima Yojana (PMFBY) during FY20. National Health Protection Scheme was announced under Union Budget 2018-19 as part of Ayushman Bharat. The scheme provided insurance cover up to Rs. 500,000 (US$ 7,723) to more than 100 million vulnerable families in India.

Pradhan Mantri Jan Arogya Yojna (PMJAY), the world’s largest social health scheme, is expected to provide coverage to around 50 crore people. Fund of Rs. 6,400 crore (US$ 887 million) has been allocated for FY21, which is thrice that of last year.

Enrolments under the Pradhan Mantri Suraksha Bima Yojana (PMSBY) reached 154.7 million till December 2019 since its launch.

Going forward, increasing life expectancy, favourable savings and greater employment in the private sector is expected to fuel demand for pension plans. Likewise, strong growth in the automotive industry over the next decade would be a key driver for the motor insurance market.

Life insurers reported 14% YoY growth in individual annualised premium equivalent (APE) in October 2020, compared with 4% YoY in September 2020. The scope of IoT in Indian insurance market continues to go beyond telematics and customer risk assessment. Currently, there are 110+ InsurTech start-ups operating in India.

Awareness about crop insurance in India is 38.8%, and still, crop insurance market in India is the largest in the world. The public and private sectors have been actively working towards crop insurance. For instance, in October 2020, the Andhra Pradesh rolled out  free of cost crop insurance scheme for the state farmers while the Reliance General Insurance and SatSure partnered to launch the satellite-based crop monitoring and predictive analytics support for better risk management and to improve efficiency of its crop insurance business operations.