At rank 48, India stands among the top 50 countries in the Global Innovation Index 2020.

Science and Technology Development in India 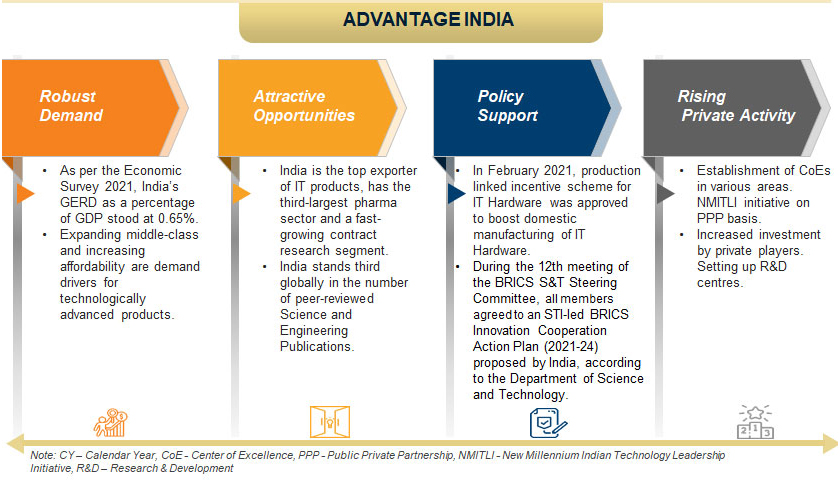 India ranks third among the most attractive investment destinations for technology transactions in the world. Modern India has had a strong focus on science and technology, realising that it is a key element for economic growth. India is among the topmost countries in the world in the field of scientific research, positioned as one of the top five nations in the field for space exploration. The country has regularly undertaken space missions, including missions to the moon and the famed Polar Satellite Launch Vehicle (PSLV).

India is likely to take a leading role in launching satellites for the SAARC nations, generating revenue by offering its space facilities for use to other countries.

The Government is extensively promoting research parks technology business incubators (TBIs) and (RPs), which would promote the innovative ideas till they become commercial ventures.

India's National Artificial Intelligence Strategy prepared by NITI Aayog outlined a way forward to harness the potential of Artificial Intelligence (AI) in different fields. Accenture offers a framework for assessing the economic effect of AI for selected G20 countries in its latest AI research studies and forecast that AI will raise India's annual growth rate by 1.3% points by 2035.

The Council of Scientific and Industrial Research runs 37 national laboratories and 39 outreach centres. India ranks 10th in the Global Cybersecurity Index 2020 that was launched by the International Telecommunication Union.

With support from the Government, considerable investment and development has incurred in different sectors such as agriculture, healthcare, space research, and nuclear power through scientific research. For instance, India is gradually becoming self-reliant in nuclear technology.

Some of the recent developments in the field of science and technology in India are as follows:

India is aggressively working towards establishing itself as a leader in industrialisation and technological development. Significant developments in the nuclear energy sector are likely as India looks to expand its nuclear capacity. Moreover, nanotechnology is expected to transform India’s pharmaceutical industry. The agriculture sector is also likely to undergo a major revamp with the government investing heavily for a technology-driven Green Revolution. Government of India, through the Science, Technology and Innovation (STI) Policy-2013, among other things, aspires to position India among the world’s top five scientific powers. Indian Space Research Organisation (ISRO) will launch its first Indian human mission by 2022.

India initiated a landmark policy called Science, Technology and Innovation Policy 2020 with core vision of being decentralized, evidence informed, bottom-up, experts-driven, and inclusive. The policy aims to be bring-in the concept of ‘dynamic policy’ with a robust policy governance mechanism incorporating features such as periodic review, policy evaluation, feedback, and adaptation, and a timely exit strategy for various policy instruments.