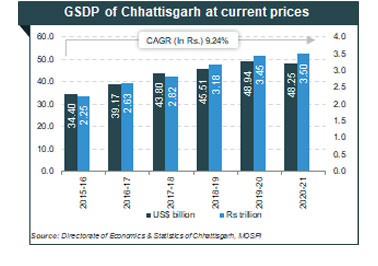 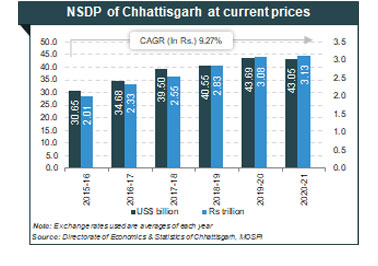 Chhattisgarh is in the central part of India. The state shares its border with Madhya Pradesh and Maharashtra in the west, Uttar Pradesh in the north, Odisha and Jharkhand in the east, and Andhra Pradesh, Telangana in the south.

It is among the richest Indian states in terms of mineral wealth, with 28 varieties of major minerals, including diamonds. Chhattisgarh ranked third in terms of value of mineral production (excluding atomic, fuel and minor minerals) in India, with a 14.8% share in 2019-20.

Chhattisgarh's combined export of aluminium and products, iron ore, and iron and steel products reached US$ 1,037.19 million in FY21. Non-basmati rice, iron & steel and aluminium products are the main exports, contributing ~20.46%, ~14.92% and ~13.93%, respectively, to the state’s merchandise exports.

Natural resources, policy incentives and infrastructure in the state support investment in iron and steel, cement, and power sectors. Korba district in Chhattisgarh is known as the power capital of India. Moreover, considerable reserves of bauxite, limestone and quartzite are available in the state, making it the ideal location for low-cost production of end products such as cement and aluminium.

Below are some of the major initiatives taken by the Government to promote Chhattisgarh as an investment destination: