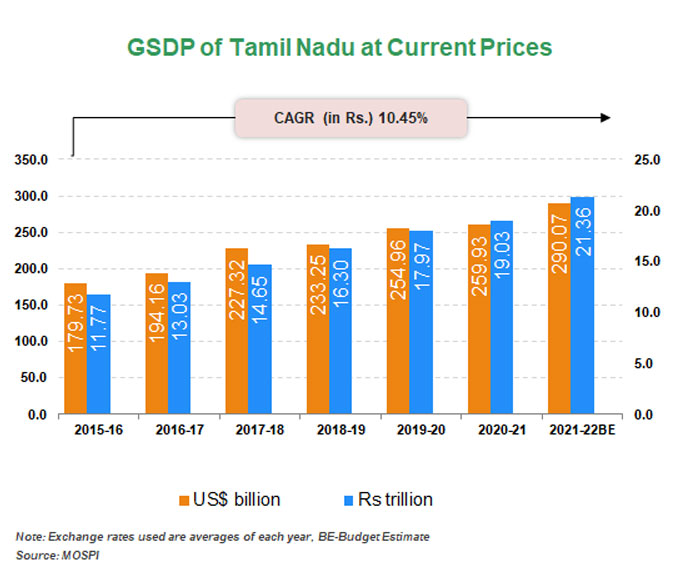 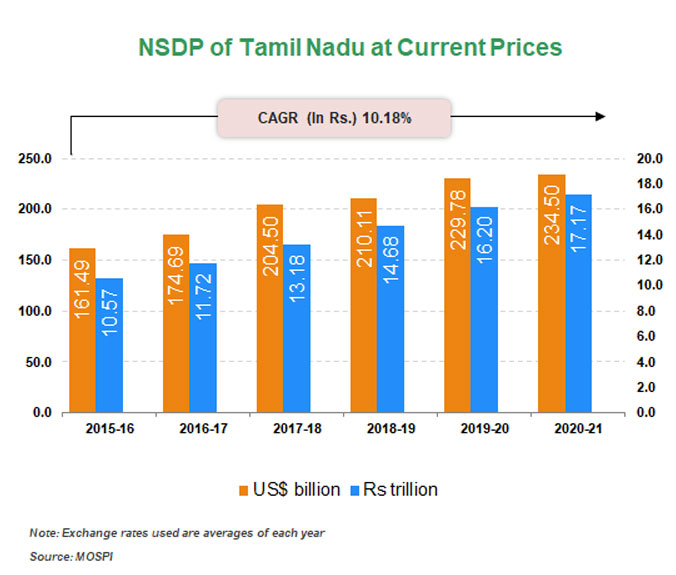 Tamil Nadu is the fourth-largest state of India. Located on the southern coast of India, Tamil Nadu is surrounded by Andhra Pradesh on the north, Karnataka and Kerala on the west, Indian Ocean on the south, and Bay of Bengal on the east.

Tamil Nadu has a diversified manufacturing sector and features among the leaders in several industries like automobiles and auto components, engineering, pharmaceuticals, garments, textile products, leather products, chemicals, plastics, etc. It ranks first among the states in terms of number of factories and industrial workers.

According to Department for Promotion of Industry and Internal Trade (DPIIT), cumulative Foreign Direct Investment (FDI) inflow in Tamil Nadu and Puducherry stood at at US$ 3,329 million between October 2019 and March 2021.

Between the second quarter and third quarter of FY21, the state received new investments of ~Rs. 61,000 crore (US$ 8.3 billion). Of this, some key private investments included Rs. 4,629 (US$ 631 million) crore solar photovoltaic modules project by SunEdison Energy India; Rs. 2,500 crore (US$ 341 million) lithium-ion batteries project in Tiruvallur by Lucas-TVS and a Rs. 2,300 crore (US$ 314 million) plant is being set up by Daimler India Commercial Vehicles at Oragadam.

Tamil Nadu has a well-developed infrastructure with an excellent road and rail network, three major ports, 15 minor ports, and eight airports across the state providing excellent connectivity. As of February 2021, the state had a total installed power generation capacity of 33.44 GW.