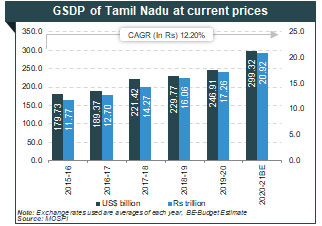 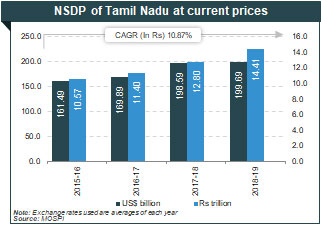 Tamil Nadu is the fourth largest state of India. It has a diversified manufacturing sector and features among the leaders in several industries like automobiles and auto components, engineering, pharmaceuticals, garments, textiles, leather, chemicals, plastics, etc. It ranks first among the states in terms of number of factories and industrial workers.

In 2019-20, tertiary sector contributed 54.63 per cent to state’s Gross State Value Added (GSVA) at current prices, followed by secondary sector at 31.92 per cent.

As of March 2020, the state had a total installed power generation capacity of 32.84 gigawatt (GW).

According to Department for Promotion of Industry and Internal Trade (DPIIT), cumulative Foreign Direct Investment (FDI) inflow in Tamil Nadu and Puducherry stood at US$ 32.20 billion between April 2000 and March 2020.

Tamil Nadu Industrial Guidance and Export Promotion Bureau has been set up with an objective to attract major investment proposals to Tamil Nadu.

Some of the major initiatives taken by the Government to promote Tamil Nadu as an investment destination are: