5G Rollout - A Crucial Moment for the Indian Telecom Sector

Telecommunication is the fastest growing industry in India. With 1.189 billion telecom subscribers and 825 million Internet subscribers, India’s telecom industry is the second largest in the world. Over the last few years, the industry has grown exponentially, mostly led by low-cost tariffs, increased availability of the internet, implementation of mobile number portability (MNP), expansion of 3G and 4G coverage, change in subscriber consumption patterns and favourable regulatory environment. The government has underlined the importance of increasing India’s local telecom manufacturing capabilities. Efforts are also underway to build a foundational network in India for the introduction of 5G technology. 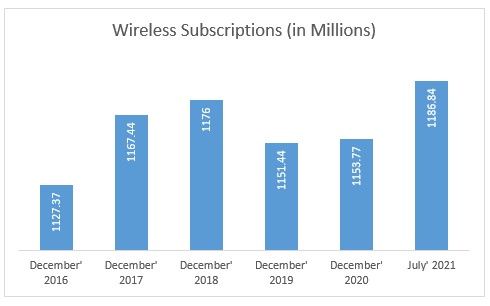 The 5G technology is the next-generation wireless communication standard, connecting gadgets, machines, enterprises and people. While 4G networks were primarily intended for phone use, 5G networks are intended for much more flexible use, eliminating the need for several specialised networks. They can even operate as multiple distinct networks at the same time.

The concept of 5G networks in India first came up in 2017, when the government organised a high-level forum to develop a path for the 5G technology in India. The timeline for the 5G rollout is as follows: 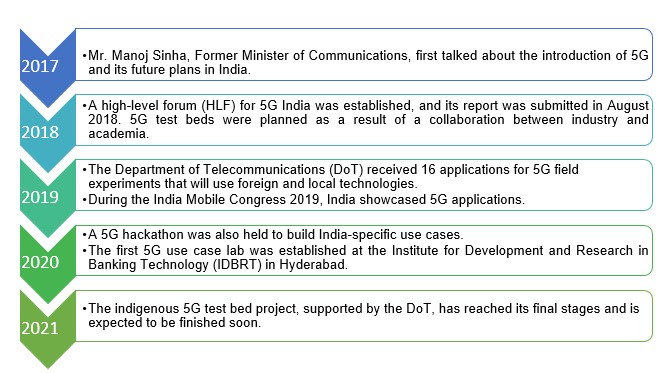 Given the journey of 5G in India, which is currently picking up pace, a much clearer picture of the future leading up to the 5G debut in India can be constructed.

5G drive towards innovation and its applications

Once the vision of 5G in India is realised, it will drive digital revolution in India, transforming the productivity, experiences and aspirations of its citizens. The 5G technology can play a significant role in the following industries:

The government plans to bring in nine structural and five procedural reforms in the telecom sector. The Department of Telecommunications permitted various telecom service providers (TSPs) to conduct trials for the use and application of 5G technology in India.

The government has taken the following initiatives for the development of 5G in India:

In addition, the government is also working on the following projects to improve internet penetration and connectivity in the country:

The Atmanirbhar Bharat programme is a significant driver for addressing present and future technology needs in the telecom sector. The sector is predicted to contribute 8% of India’s GDP in 2022, up from 6.5% currently. It is also anticipated that 5G technology will add US$ 450 billion to the Indian economy between 2023 and 2040. The potential of 5G in India is genuinely transformative. Once built, it will accommodate up to one million connected devices per square kilometer compared with only 2,000 under 4G long-term evolution. With such unprecedented levels of connection and 5G Internet, India will be able to alter education, healthcare, agriculture, and other sectors in rural areas while constructing future smart cities - all trademarks of a 5G India.