The global economy is presently going through the fourth Industrial Revolution, also known as the Digital Revolution. This revolution is changing not only the way we interact with machines, but also how we live, work and interact with each other. Thus, for surviving this revolution, businesses around the world are opting for the digital road. India too, has witnessed the need for this transformation. Thus, the use of digital technology is continuously being promoted by the government and has seen a rise lately. The digital technology has an important role in increasing the pace of India’s economic growth. This creates an opportunity for the country to make a just and equitable society. India can reach the front rank of nations with the help of technology.

The Digital India program was launched by the Prime Minister, Mr Narendra Modi on July 1, 2015 and since then has made significant progress with various initiatives launched under this initiative. The focus has been on three key aspects: in the creation of pervasive national digital infrastructure, in the electronic delivery of public services and financial assistance to citizens, and in enhancing digital awareness and literacy.

Digital services are the second most important component of the program. The government has taken various steps to develop and provide digitised services for the citizens. Services include National e-Governance Plan (NeGP) that focuses on one aspect of electronic governance, move towards cashless economy, virtual network operators (VNOs) to set up operations in India, etc. During the first quarter of 2019, India became the world’s fastest-growing market for mobile applications witnessing growth in downloads of various applications.

BharatNet – Also known as Bharat Broadband Network Limited (BBNL), intends to offer broadband access to around 250,000-gram panchayats (GPs) through a network of Optical Fibre Cable. As of November 2019, 3.8 lakh kilometre OFC has been laid out in the country, which has connected 1.4 lakh GPs. Wi-fi hotspots have been installed in 44,786-gram panchayats and 32 post offices are utilising BharatNet connectivity via BSNL. The total funds allocated by Universal Service Obligation Fund to Bharat Broadband Network Limited under BharatNet project include Rs 20,431 crore (US$ 2.92 billion) out of which Rs 10,286 crore (US$ 1.47 billion) were for phase I and Rs 10,145 crore (US$ 1.45 billion) for phase II.

Common Service Centres (CSCs) - Common Service Centre is an initiative of the Ministry of Electronics & IT, Government of India. These are the access points for delivery of numerous electronic services to villages in India, thus providing support to a digitally and financially inclusive society. At present there are around 2.75 lakhs centres across the country covering all the Gram Panchayats. The main participant of the CSC scheme is the Village Level Entrepreneur (VLE) and they are known as CSC operators. A grid of 2.70 lakh VLEs, of which 1.63 lakh are in Gram Panchayats actively offering several online public utility and financial services to citizens, quality healthcare, apart from encouraging entrepreneurship and employment in villages and smaller towns across the country.

Aadhaar – Digital identity has been an important system to create a single unique identification document or number that would link all people’s lives together across their accounts at various businesses. Around 1.21 billion residents are connected with the Aadhaar identity, thus, can be considered as world’s largest biometric identity system. This is a 12-digit unique number which is based on the demographic and biometric data of the person. Data is collected by UIDAI that provides efficient and transparent governance to the people of India through Aadhaar. This is accepted as identity proof across the country and has a lifetime validity. There is direct benefit of it as LPG subsidy amount get directly in the bank account when the Aadhaar is linked with consumer number. Passport is made available within 10 days. Pension and Provident Fund will also be given to the account holder who has registered their Aadhaar number with respective departments.

National Cyber Coordination Centre (NCCC) – The centre is set up by the Ministry for electronics and IT providing protection against the potential threat to the Indian cyberspace.  NCCC will offer a structured system and enable coordination among various agencies by sharing with them the meta-data from cyberspace for taking action to mitigate cybersecurity threats. In November 2019, National Cybersecurity Co-ordinator’s office, in collaboration with Data Security Council of India (DSCI), opened the first national cyber technology repository portal, TechSagar. 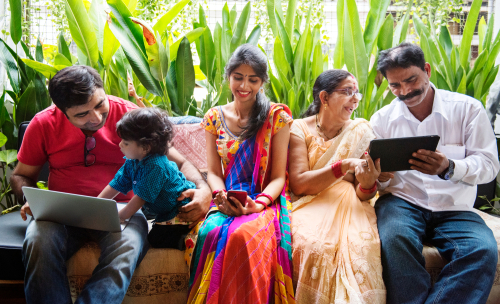 The main enablers for development of various digital infrastructure include usage of cloud computing and analytics. The government plans to make use of cloud computing technologies to allow integration between various departments and delivery services to the citizens. One such launched service is DigiLocker. This is kind of virtual locker that intends to minimise the usage of physical documents and allow sharing across various departments. DigiLocker reduces the chances of losing an original document and ease the burden of carrying all documents in physical forms all the time. It is vastly accepted by all government and non-government departments. The analytics is used by a data repository called the Electronic Transaction Aggregation and Analysis Layer (e-taal), which provides real time transaction data of citizens with various departments and agencies of the government along with a quick analysis of the information in graphical form.  The real-time data help in making decision by various government agencies.

Another such application is MyGov, a citizen-centric platform that empower people to connect with the government and contribute towards good governance. MyGov has almost 10 million users and government intend to expand the content into multiple languages. Polls and surveys are conducted to connect the people and government. E-Hospital programme is another digital initiative launched for making premier healthcare facilities. This let patients to register, book appointments, pay fee, avail diagnostic reports and seek availability of blood types online in premier medical government institutes like All India Institute of Medical Sciences (AIIMS), Ram Manohar Lohia (RML) Hospital, National Institute of Mental Health and Neuro Sciences (NIMHANS) and Sports Injury Centre (SIC) as well as any other government hospitals. The e-hospital runs an Online Registration System (ORS) which connect many hospitals to citizens through an Aadhaar based online registration and appointment system. The application is hosted on cloud service of NIC and allows patients to book online appointments with different section of the hospital by using eKYC data of the Aadhaar. The overall Indian healthcare market is expected to grow to US$ 280 billion by 2020 demonstrating a CAGR of around 23 per cent supported by the enhanced adoption of digital technologies in healthcare.

Massive open online courses (MOOCs) are a distance learning initiative that let students to access video tutorials, curriculum and instructions online and offer real-time education. This helps in addressing the challenge of lack of teachers in the system through smart and virtual classrooms. This provides opportunity to reach in rural areas and weaker sections of the society through mobile devices. The increased and improved data connectivity and IT structure has led education sector to grow.

The digitalisation has not only helped in education and healthcare sector but also provided platform for the agricultural community. Small Farmers’ Agribusiness Consortium, an agency under the Agriculture ministry and Reuters Market Light (RML), launched Krishidoot, an app that provides important information to farmer groups such as mandi pricing, crop advisory and local weather forecast. This intends to enhance the productivity by allowing farmers to achieve better prices for agricultural produces and enhance procurement cost for quality agricultural inputs.

Internet subscriber base of India is expected to grow from 665.31 million in 2019 to 829 million in 2021. Unified Payment Interface (UPI) was launched that allow transaction between two bank accounts using two smartphones. Value of Unified Payments Interface (UPI) transactions crossed 1 billion-mark and witnessed transaction value of Rs 1.91 lakh crore (US$ 27.33 billion) in October 2019. This boosted the cash-less economy. Another one is Pradhan Mantri Jan Dhan Yojana (PMJDY) under which the deposits have crossed Rs 1 lakh crore (US$ 14.03 billion) and the number of accounts opened were 373.4 million.

The Digital India program is expected to benefit citizens over the next few years by creating employment opportunities, increasing speed and quality of service delivery and enhancing social and financial conclusion. The government has initiated several programs like the National Digital Literacy Mission (NDLM) and Skill India program to increase IT awareness and literacy. Although, there is increase in the usage of smartphones and internet, but the digital literacy and awareness is still low and is an area that has potential to grow.