India ranks third in terms of energy production worldwide. India aims to use sustainable energy to improve its economic development, energy security and access to energy, and mitigate climate change. Strong support from the Indian government and substantial private sector investment has helped India become one of the world’s most attractive renewable energy markets.

Need for sustainable energy
India urgently needs to increase its share of alternate sustainable sources to generate energy. As of 31st January 2022, almost 60% of India’s power generation came from non-renewable fossil fuels – diesel, gas, coal and lignite. According to the Research Institute for Humanity and Nature, India ranks third on its list for carbon greenhouse gas emissions, accounting for 2.46 billion metric tonnes of carbon emission annually, which is 6.8% of the global total. India emitted 2.88 gigatonnes of CO2 annually as of 2019. To satisfy its energy needs, India is estimated to have imported around 180–190 metric tonnes of coal in FY22. In FY22, until February, India imported 193.5 million tonnes of crude oil worth US$ 105.8 billion.

The above facts show India’s power needs are still heavily dependent on these non-renewable sources of energy, which are harmful to the environment and imported at a high cost. In fact, according to a Greenpeace India analysis, replacing coal plants with renewable energy sources can help India save Rs. 54,000 crore (US$ 7.11 billion) annually due to reduced power costs.

Growth of renewable sources of energy
Over the past few years, India has made substantial strides in solar, wind and hydro energy, which are the three biggest sources of renewable energy generation in the country.

1. Solar Energy:
India’s solar energy potential is immense. Solar power installed capacity has increased over 19 times, from 2.63 GW in March 2014 to 50.3 GW at the end of January 2022. Furthermore, between April-December 2021, India added 7.4 GW of solar power capacity, up 335% YoY. India also has a good standing globally with respect to solar energy. India stood fifth globally in terms of the maximum installed capacity of solar rooftop installations. Gujarat, Rajasthan, Haryana and Maharashtra account for 57.56% of the solar rooftop installations in India as of January 2022. Off-grid solar power is also growing fast in India, with sales of 329,000 off-grid solar products in the first half of 2021. The Bhadla Solar Park in Rajasthan's Jodhpur district is the largest solar power plant in the world. The power plant, which spans 14,000 acres, is fully operational and has a capacity of 2,250 MW.

2. Hydro Energy:
India overtook Japan to become the nation with the fifth largest hydropower production capacity in the world with a total installed capacity of over 51.35 GW. India has vast potential in the hydro power sector, which is being explored across various states, especially in the northeast. Installed capacity from large hydro projects in India increased from 35.9 GW in March 2008 to 46.5 GW as of December 2021, while capacity from small hydro plants increased four-fold to 4.8 GW in the same period. 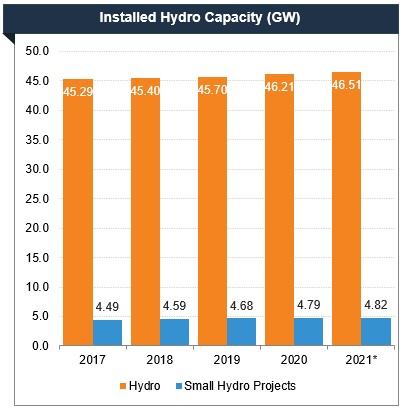 Government initiatives
The Indian government has taken multiple initiatives and implemented various policies to promote renewable energy generation in the country. In June 2021, India launched the Mission Innovation CleanTech Exchange, a global initiative that will create a whole network of incubators across member countries to accelerate clean energy innovation. Some of the recent initiatives in this space include:

Future outlook
The Indian government is fully aware of the benefits and need for sustainable energy. At the COP26 Summit in Glasgow, Prime Minister Mr. Narendra Modi announced India’s aim to reach net zero emission by 2070. He also promised to increase India’s renewable energy generation capacity to 500 GW and meet 50% of India's energy needs through renewable means by 2030. Today, India is one of the few G20 countries on track to achieve their targets under the Paris Agreement. In 2022, India’s renewable energy sector is expected to boom with a likely investment of US$ 15 billion this year, as the government focuses on electric vehicles, green hydrogen, and manufacturing of solar equipment.