Introduction
The Reserve Bank of India defines FDI as purchase of 10% or >10% stake in a publicly listed company by an individual or any foreign based company (or any foreign investment) in an unlisted firm. Since the economic liberalisation began in 1991, the Indian government has eased the country’s investment policies and introduced favourable initiatives; therefore, been successfully in making India an ideal investment hub for foreign investors. Following this, factors such as relatively lower wages, special investment privileges such as tax exemptions, a conducive business environment and a fast-growing consumer base also attract foreign companies to invest in India. The GDP (Gross Domestic Product) growth rate has also recorded a significant raise, making India a fastest growing economy, surpassing China and the US in 2015.

FDI Inf­lows of the Top 10 Countries (US$ billion)

India was ranked as the fifth-largest recipient of Foreign Direct Investments (FDIs) in 2020, according to the latest World Investment Report-2021 (WIR) that was released by UNCTAD (United Nations Conference on Trade and Development). The report highlighted that India’s FDIs were bolstered due to key acquisitions in information and communication technology (ICT) and construction sectors. Of these acquisitions, key transactions included acquisition of Jio Platforms by Jaadhu (a subsidiary of Facebook US) for US$ 5.7 billion; sale of the Electrical & Automation division of Larsen & Toubro India for US$ 2.1 billion; acquisition of Tower Infrastructure Trust by Brookfield (Canada) and GIC (Singapore) for US$ 3.7 billion; and Unilever India’s merger with GlaxoSmithKline Consumer Healthcare India (a subsidiary of GSK UK) for US$ 4.6 billion.

Total FDI Inflow - Key Stats
In FY20-21, India has attracted record FDIs amounting to US$ 81.72 billion, 10% higher than the previous financial year. In the first four months of FY21-22, India attracted FDIs worth US$ 22.5 billion. For FY20-21, computer software and hardware emerged as the top sector with 55% share of the total FDI inflow, followed by construction infrastructure at 16% and services sector at 11%. Moreover, India has been able to attract FDI amid the ongoing COVID-19 pandemic due to the economic shift from China and favourable government policies introduced in the country. Singapore is the key contributor of FDI in India, followed by the US and Mauritius. FDI from Singapore increased by 25% in 2020-21 as compared with 2019-20. Among all states, Gujarat, Maharashtra and Karnataka attracted the maximum FDIs in India. 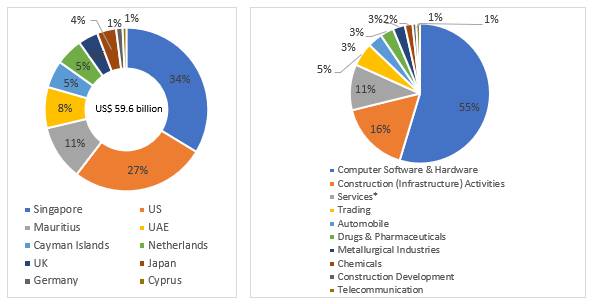 Recent Government Initiatives to Boost FDI
In the past few months, the government has relaxed FDI norms across sectors such as defence, PSU oil refineries, telecom, power exchanges and stock exchanges to attract foreign investments. While addressing at the United States–India Business Council’s (USIBC) 46th Annual General Meeting and India Ideas Summit in October 2021, Mr. Piyush Goyal, the Minister for Commerce & Industry and Minister for Consumer Affairs, Food and Public Distribution, stated that India is gearing up to boost investments, streamline the tax regime, liberalise FDI policies and encourage technological innovations. Some of the recent initiatives undertaken by the government are listed as follows:

Revision of existing policies in various sectors: In July 2020, India amended its FDI policy on civil aviation, permitting non-resident Indian nationals to own up to 100% (up from previously 49%) of Air India under the automatic route. FDI can be made under two routes—Automatic route and Government route. Under the Automatic route, no approval is required for the foreign investor or the Indian company from RBI or the government. Under the Government route, a prior approval from the government, the Ministry of Finance and the Foreign Investment Promotion Board (FIPB) is required.

Coal, Media and Civil Aviation – In December 2020, India opened investment in the coal mining sector to non-coal companies, which are now allowed to bid for coal mines. The country also liberalised the digital news media and defence sectors, wherein a foreign ownership is now allowed up to 26% through the government approval route in the former and up to 74% under the automatic route in the latter.

Space – A new policy is likely to be rolled out in the space sector. Since September 2021, the government has mandated all FDIs in the space sector to obtain government clearance first, while the industry wants the investment under the automatic route. Indian Space research Organisation Chairman Mr. K. Sivan has revealed that India will soon open its space sector for private players, due to interest expressed by foreign companies to invest in this space. For instance, Netherlands has expressed an interest in collaborating with India on miniaturisation of satellites, components & subsystems and nano satellites.

Insurance – In October 2021, it was reported that India will soon allow 20% foreign investment in Life Insurance Corporation (LIC). In March 2021, India increased the FDI ceiling on insurance companies from 49% to up to 74%; however, LIC being a special entity, which was created by an act of parliament, was not eligible for this policy. The new policy will enable investors to apply for a stake without government approval under the automatic route.

Facilitating secure investments from land border sharing countries: In April 2020, India introduced a mandate for all investments—originating from countries that share land borders with India—must obtain a prior approval from the government. China, Bangladesh, Pakistan, Bhutan, Nepal, Myanmar and Afghanistan share land borders with India. The government has received maximum FDI proposals in electronics and IT, industry and internal trade, and heavy industries segments from these countries. The mandate is aimed at curbing opportunistic takeovers or acquisitions of Indian companies amid the pandemic.

The Road Ahead
India being the sixth-largest economy in the world is characterised by an exponential consumer base, making it desirable to potential investors. In September 2021, Deloitte CEO, Mr. Punit Renjen revealed that in a recent survey of 1,200 business leaders, over two-fifths of the leaders in the US, the UK, Japan and Singapore are planning first-time investments or to pump up their existing investments in India. He added that India continues to be ‘one of the most attractive’ FDI destinations. A rising young population, technology skillsets in the labour force, liberalised FDI government norms, and cheap and abundant labour are some of the lucrative factors that attract FDI in India.

In a recent October 2021 interview with CNBC-TV18, former PepsiCo Chairperson and CEO, Ms. Indra Nooyi emphasised that while India is taking significant efforts to become a self-reliant economy, it is also imperative to attract FDI in areas that India has limited technology. She mentions that a checklist of industries with classification based on home-grown, government-supported and FDI-backed requirements need to be in place; this will serve as a blueprint to help India attract FDI into the right sectors. Besides the ICT sector, which was a key FDI booster in 2020, the manufacturing sector is also expected to boost India’s FDI for the current year on the back of production-linked incentive (PLI) scheme, which is designed to incentivise domestic manufacturing and thereby, aimed at increasing exports. On the back of all said developments, relaxed policies and investor-friendly reforms, India truly offers a conducive ambience for foreign investments in the near future.