Long before the emergence of fantasy sports in India, sports consumption was merely restricted to passive entertainment from the comfort of one’s living room. Today, fantasy sports has changed the way fans consume their favorite sport—passive viewers are now active participants and this kind of gaming keeps them at the edge of their seats. In a country like India, where every sports fan has an opinion and considers himself an expert, fantasy sports has become an enabler—getting sports fans closer to the real-time action. While cricket certainly has triumphed among fantasy sports in India (by the number of subscribers and mass popularity), other sports such as football, kabaddi and basketball (NBA) have also started gaining popularity in the recent times.

Fantasy sports is a form of skill-based online sports where a sports fan creates his/her own team comprising real-life players from upcoming games. These virtual teams accumulate points based on the actual statistical performance of players during real-life match and winners are revealed accordingly.

As the fantasy sports industry is rapidly gaining critical mass and multiple operators are emerging with various business models and offerings, it is imperative to have a governing body to shape and monitor this fast-growing industry. The Federation of Indian Fantasy Sports (FIFS), previously known as the Indian Federation of Sport Gaming (IFSG), was formed in 2017 to safeguard consumer interest and create standard best practices for the fantasy sports format in the country. The FIFS is a self-regulatory body, which not only ensures policy compliances, but also works with key industry stakeholders and policymakers to create a robust governance structure to support sustained growth of the fantasy sports industry and increase user confidence.

The Indian fantasy sports market is primarily driven due to growth in digital infrastructure, rise in mobile internet subscriber, favorable demographics and rising disposable income, tech-savvy and aficionado sports following Indian millennials, and increased investor interest in fantasy sports. Also, the recent case laws have established fantasy sports as a game of skill compared with illegal activities such sports betting. This factor has created a viable ecosystem for the industry to flourish and be more accessible and engaging for India’s sports fans.

Currently, the fantasy sports industry is at a nascent stage, with numerous start-ups competing to attract the country’s 800 million sports viewers. This trend is likely to persist as these companies thrust into various sports leagues to attract advertisers, customers and investors. Apart from Indians’ unending love for sports, especially cricket, low-cost data plans and high penetration of mobile phones have made these start-ups a lucrative bet for investors. Over the past five years, investors have pumped US$ ~112 million into India’s sports fantasy platforms. 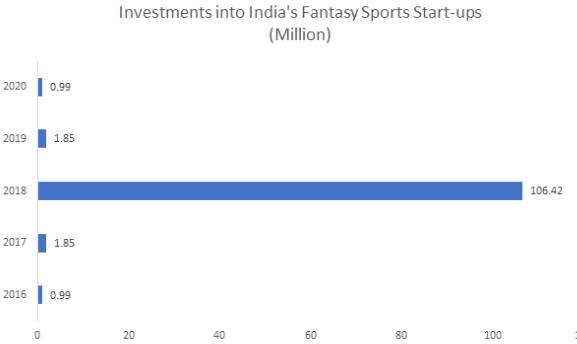 In 2018, Dream 11 raised US$ 100 million in a Series D funding round led by Chinese multinational investment holding conglomerate Tencent. This had resulted into a phenomenal spike in investment value for year 2018.

The fantasy sports market has grown swiftly in India, with about 10 players operating in 2016 to 150 operators at present. Dream 11, also the founding member of the Federation of India Fantasy Sports (FIFS), is one of the biggest players in the fantasy sports market in India. Members of the FIFS comprises MyTeam 11, Fancode, Fancy 11, My 11 Circle, Faboom, Fanfight and Guru 11.

Following are the prominent fantasy sports platforms in India: 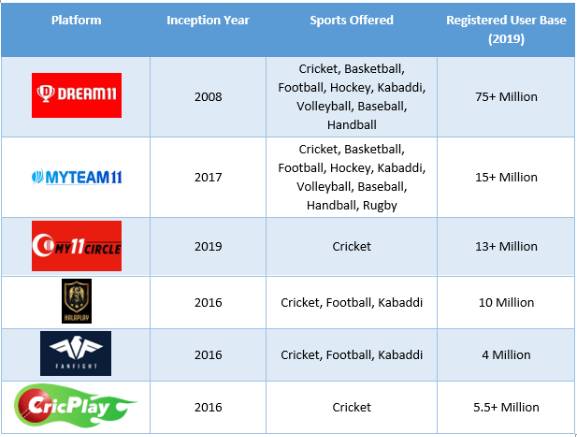 The top 4–5 platforms currently account for ~95% of India’s fantasy sports industry. The demand-side pull, expansion in relatively untapped geographies, along with the introduction of newer sports leagues, will continue to guarantee new user acquisitions across the fantasy sports platform for the imminent future.

However, rise in competition, high cost associated for customer acquisition, innovative offerings by well-funded market leaders to retain and acquire their users, coupled with the business impact of COVID-19 are likely to impact a certain level of market consolidation in the near to medium term.

India’s recent ban on 59 Chinese apps, followed by 118 more including renowned multiplayer action game PUBG (PlayerUnknown's Battlegrounds) is bound to open new avenues for domestic game developers. Enormous opportunity is likely to emerge for the Indian game developer and publisher to capitalize this opportunity and fill the supply gap. The launch of AatmaNirbhar Bharat Innovate Challenge by the Ministry of Electronics and Information Technology (MeitY) and NITI Aayog is expected to deliver more advanced gaming apps in the market. This initiative is likely to propel growth of the Indian mobile gaming market in future and enhance the sports economy of India, which is slated to be the major revenue earner in the foreseeable future. The government is creating a conducive ecosystem for Indian game developers by rationalizing the right market conditions and creating an appropriate policy framework so that investors make the most of this golden opportunity.

Furthermore, the success of domestic stakeholders, exponential growth trajectory of the fantasy sports market and its potential have now grabbed the interest of foreign investors. Multiple overseas investors have already invested in various fantasy sports platforms and the rise in user engagement will likely keep this momentum in the coming years.