The technology sector in India has witnessed its largest foreign direct investment (FDI) as Facebook announced its investment in Jio Platforms, a unit of Reliance Industries (RIL), on April 23, 2020. Facebook plans to invest around Rs 43,574 crore (US$ 5.7 billion) for a 9.99 per cent stake in the company. This investment by Facebook values Jio Platforms at Rs 4.62 lakh crore (US$ 66.10 billion) pre-money enterprise value. Through this deal, Facebook has been given an opportunity to expand its presence in the Indian market, which is considered as one of the largest markets in terms of users and has a telecom industry with affordable data plans. The investment in Jio Platforms has increased its investment value and it is now amongst the top five listed companies in India by market capitalisation.

Reliance Jio Infocomm Limited is a wholly owned subsidiary of Jio Platforms. Jio was launched in 2016 and is considered as India’s largest mobile services company by subscriber base. It is the only company in India having an entire network developed on 4G VoLTE (voice over long-term evolution) technology. A world-class digital platform powered by leading technologies such as Broadband connectivity, Smart Devices, Cloud and Edge Computing, Big Data Analytics, Artificial Intelligence, Internet of Things, Augmented and Mixed Reality and Blockchain has been developed by Jio. 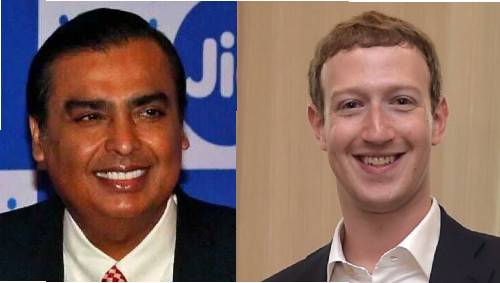 Jio alone has a subscriber base of 388 million, as compared to the combined user base of Instagram, Facebook, and WhatsApp at 700 million. Cumulatively, this will account for user base of around one billion with considerable overlaps.

Reliance Retail, RIL's retail arm, has also partnered with Facebook's WhatsApp, which will permit RIL's e-commerce business users to use the WhatsApp platform. JioMart (business-to-business) ecosystem of RIL, Facebook and WhatsApp have been trying to add small and medium businesses (SMBs) on their respective platforms. They have been trying to get local kirana stores on board to expand their digital retail sector. Users will be able to buy goods and services using WhatsApp and Facebook Messenger. Under this deal, both the companies will look to grow in the hyperlocal commerce. Jio Platform will be able to launch its omni-channel ‘New-Commerce’ strategy where merchants and mom-and-pop stores will be digitalized through Jio point-of-sales machines.

WhatsApp Pay is expected to launched in mid-2020. This may also benefit from Jio’s Payments Bank and can use @jio handle instead of the existing @icici handle. Facebook will be able to get deeper and richer data through the commercial agreement between JioMart and WhatsApp. Consumption patterns will provide detailed insights about “who is consuming what” to “how much is someone spending”. Also, advertising on Facebook is easy, so Jio can also utilise Facebook’s ad platform into its products on a revenue share basis. WhatsApp can be used by Jio as an end-to-end service for business to retailers’ channel.

Jio will also gain from Facebook’s user analytics-powered targeted advertising, one of the important pillars of Facebook’s business model. Tie-up between the companies will also be focused on making interaction easy for people with a business of their choice. This will help in easy purchase of a product right within a chat. Jio-Reliance Retail has an offline presence while Facebook lacks that, and therefore, both companies can look to lift each other and compete against their competitors across e-commerce, payments, enterprise services and other areas where companies like Google, Amazon, and Flipkart have a strong presence. The online-to-offline (O2O) commerce initiative could potentially change the landscape of retail as Whatsapp has a reach over 400 million customers in India.

The deal between Facebook and Jio Platform will also help customers to buy products from social media. For example, if a customer saw an apparel on Instagram and liked it, he can now feed this data about apparel into Reliance Retail’s inventory, which in turn can inform the customer about its availability and the transaction can be initiated and completed.

Facebook owns Oculus, which is one of the first companies to develop consumer VR headsets. Jio already bundles its mixed-reality platform and virtual and augmented reality (AR) experiences with its broadband service. With this partnership, Jio’s value proposition can be improved with Oculus.

After the announcement of this deal, Reliance Industries Chairman, Mr Mukesh Ambani became Asia's richest man with a fortune of around US$ 49.2 billion.

The deal is expected to complement Prime Minister Mr Narendra Modi’s ‘Digital India’ Mission with Ease of Living. Thus, an increased penetration of Jio in small towns and cities along with a strong relationship and community bonding on Facebook and Whatsapp will help build a potent user base for this new partnership to flourish.