The Indian logistics sector is on a big growth tide. According to the domestic rating agency ICRA, Indian logistics sector is expected to grow at a rate 8-10 per cent over the medium term. This is an improvement over the compound annual growth rate (CAGR) of 7.8 per cent at which the industry grew during the last five years. The logistics industry of India is currently estimated to be around US$ 160 billion. With implementation of GST the sector is expected to benefit and touch US$ 215 billion over the next two years, as per the Economic Survey 2017-18.

The last couple of years have seen significant development for this industry which is reflected in the global rankings. According to the Global Ranking of the World Bank's 2016 Logistics Performance Index, India jumped to 35th rank in 2016 from 54th rank in 2014 in terms of overall logistics performance. The report also showed that India’s logistics sector has improved its performance on all the six parameters used in the ranking. This is a huge jump of 20 ranks and clearly indicates the growth of the sector. 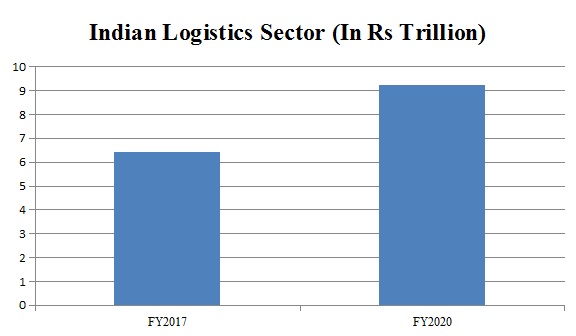 The government of India is also taking significant steps to support the sector and boost its growth in the times to come. The commerce and industry ministry has decided to give a one-time funding of Rs 8 million to the sector for building up initial infrastructure and a phase-wise support of Rs 33.9 million for four years.

The government’s focus going forward is to bring down the cost of logistics which is at 14.4 per cent of India’s GDP at present. The aim is to bring it down to 10 per cent level in the next four years. This is a very significant move and will boost the competitiveness of the sector and will be significant for its further growth.

Going forward, strategic investment and government initiatives to support the sector are going to be crucial for the logistics industry in India. If the cards are played right, the sector has the potential to create huge number of jobs for the countrymen and play a key role in driving the economy on a high wave.