As a first step on the pathway towards low-carbon economic growth, India has set ambitious targets for both reducing carbon emissions and deploying more clean energy. As per the Paris Agreement (2015) on climate change, India has pledged to reduce the intensity of emissions by 33-35% by 2030 from 2005-levels. In addition, India has set a target to transition to non-fossil fuel-based energy for 40% of its cumulative electricity generation capacity by 2030. One of the key sectors of the Indian economy that can provide a great impetus in achieving India’s 2030 targets is the Indian Railways.

Indian Railways is currently the world's second-largest railway network (under single management), with a network length of >67,000 route kilometres (RKM). It is the single largest consumer of electricity in India, and the energy consumption of railways is divided into two segments traction and non-traction. The traction segment consumes energy for running the network of trains and uses both electricity and diesel, while the non-traction segment’s energy consumption includes energy consumption at stations, factories/workshops, street lighting, staff housing and others.

In 2017, the rail sector consumed ~4.1 million tonnes of oil equivalent (Mtoe) of energy to meet its traction requirements. At 0.04 million barrels of oil equivalent per day (mb/d), diesel was the primary fuel, accounting for >50% of the total. As per the NITI Aayog data, CO2 emissions from Indian Railway was ~6.84 million tons in 2014.

To reduce the dependency on fossil fuels, the government is focussing on electrification, as an electrified railway system can more easily transition to clean energy alternatives such as solar and wind power.

A prerequisite step to achieve ‘net-zero’ emissions is to transition towards an electrified railway system and reduce the use of diesel-powered trains to the maximum extent possible. As of March 2019, electrification on Indian Railways has been extended to 34,319 RKMs, out of the total rail network of 67,415 RKMs - this constitutes ~50% of the total railway network.

On this electrified route, 65.4% of freight traffic and 56.2% of passenger traffic is hauled with fuel cost on electric traction being ~33.2% of the total traction fuel cost on Indian Railways. In addition, Indian Railways has planned to electrify the remaining broad-gauge rail routes by 2023 to achieve 100% electrification on those routes. 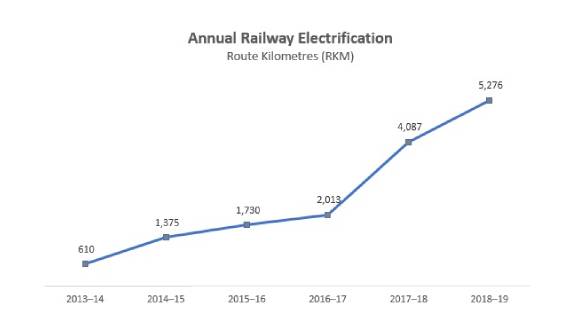 With this ambitious plan of achieving 100% electrification for railways by the year 2023, Indian Railways' energy consumption is set to reach >33 billion units by 2030 from its current annual requirement of ~21 billion units.

The clean electricity alternatives that Indian Railways could transition to include solar power, wind power, nuclear power, hydropower, biomass energy, and geothermal energy. Of these, the most feasible is solar power and wind power.

Indian Railways is committed to employ solar energy for meeting its traction power demand and become a complete ‘green mode of transportation’. As part of this target, a mega plan has been developed to install solar plants of 20 GW capacity by utilising vacant lands by 2030. This development is in line with a recent directive by Prime Minister, Mr Narendra Modi, to solarise railway stations and utilise vacant railway land for renewable energy projects.

Railway Energy Management Company Ltd. is working to proliferate the use of solar energy on a large scale by floating tenders for 2 GW solar projects for Indian Railways to be installed on unutilised railway lands. According to a press release by the Ministry of Railways, these solar projects, besides supplying power to the railways at a reduced tariff, will also protect the land by constructing a boundary wall along the track. As a result, this will help in preventing encroachment, enhancing the speed and safety of trains and reducing infrastructure costs due to direct injection of solar power into the traction network.

The use of solar power and wind power will fast-track the Railways' mission to achieve the goal of becoming a 'Net Zero Carbon Emission Railway' and becoming 100% self-sustainable for all its power needs and contribute to the national solar power goals.

In addition, in 2015, Indian Railways started blending biodiesel at a 5% share; since then, such blending has been introduced across several locations. Indian Railways also plans to change the system used to provide power to coaches from the ‘End-on-Generation’ to ‘Head-on-Generation’ scheme, this conversion will allow power—for air conditioning and lighting in the coaches—to be drawn from the locomotive, instead of from diesel generators (that are installed at both ends of the train). Such  technological improvements help in reducing diesel consumption and lowering carbon emissions.

Indian Railways aims to become a 'net zero' carbon emitter by 2030 through various initiatives such as electrification of railway network, increasing use of renewable energy, and other measures. As part of this target, the other measures include reducing usage of diesel, improving energy efficiency of locomotives and trains and fixed installations, green certification for installations/stations, and fitting bio-toilets in coaches.