Introduction
The Digital Revolution in India started with the Government of India initiating the Digital India programme in July 2015 to transform India into a digitally enabled knowledge-based economy. According to Prime Minister Mr. Narendra Modi, the Digital India programme was developed to better the lives of average citizens. It aimed to make technology "accessible, affordable, and useful" to the country's citizens. The effort was divided into different parts: digital infrastructure as a utility for all citizens, governance, on-demand services, and citizen digital empowerment. After six years of this effort, the country has built a strong foundation of digital infrastructure and expanded internet access throughout its economy. India is poised for the next phase of growth — the creation of tremendous economic value and the empowerment of millions of Indians as new digital applications permeate and transform a multitude of activities and types of work at a national scale.

Benefits of India's Digital Revolution
India's digital revolution has benefited the country to a great extent. In the last six years, the government has leveraged its digital ecosystem to improve the lives of its citizens. India has used its JAM ecosystem to transfer a total of Rs. 22 lakh crore (US$ 300 billion) through Direct Benefit Transfer (DBT) schemes. The government has also revolutionised the digital payment system. India has the most significant number of real-time transactions globally, with 48 billion transactions in 2021. This is almost three times greater than China which is at 18 billion, and 6.5 times greater than the US, Canada, France and Germany combined. The Indian government's measures have gone beyond transaction standardisation. In 2019, the government was able to bring over 63 million MSMEs into the formal economy through GST. This formalisation has compelled businesses to embrace technology for tax filing and other purposes, acting as auxiliary drivers for India's growing internet adoption.

Critical Drivers for India's Digital Revolution
India has become the world's second-fastest-growing digital economy. The key drivers towards the rapid rise in India's digital ecosystem include:

Private sector investments in India's Digital Revolution:
Heavy private sector investments backed India's digital revolution. India has the world's third-largest startup ecosystem, with over 60,000 startups. The country was home to over 94 unicorns in 2021, with a total valuation of US$ 319.67 billion. India has a tech-heavy startup ecosystem with a maximum of the unicorns targeting India's mobile-first economy. One out of every 13 unicorns globally are born in India. The country witnessed a 60% rise in early-stage capital from 2015 to 2020. India's technology sector witnessed 217 deals worth US$ 14.3 billion in 2021. India's tech-based startup ecosystem includes various sectors like fintech platforms, including insurance and payments, gaming, SaaS-based tools, logistics, health-care services, education technology, logistics, e-commerce and online marketplaces. 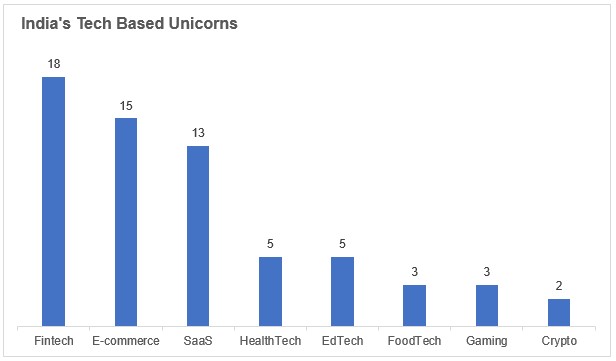 India has also seen rapid growth in its Software as a Service (SaaS) landscape. The Indian SaaS ecosystem experienced a 170% increase in investments in 2021, which reached US$ 4.5 billion. More than 35 Indian SaaS enterprises had US$ 20 million or more in annual recurring revenue (ARR) in 2021, a sevenfold growth in five years, with seven to nine of these companies exceeding the US$ 100 million ARR mark as compared to one to two companies five years ago. India has also witnessed public-private collaboration in the digitalisation of India's economy and is providing the ideal environment for technological advancement. India's telecom and IT services industries, the backbone of digital infrastructure, have received significant investments in recent years. The Indian telecom tower industry has grown by 65% in the last seven years. The government is collaborating on 44 telecom infrastructure projects across the country with multinational investors such as Vodafone, Verizon, Telefonica, Nokia (NOK), SoftBank, and Ericsson. This rise in private sector investments and startup culture has significantly boosted India's digital revolution.

Recent Government Initiatives for India's digital revolution
Since 2015, the government of India has led the charge in digitisation with its "Digital India" initiative to expand e-governance, providing individuals with access to government entities, expanding digital infrastructure across the country and connecting Indians through the Internet. India has since completed various reforms to boost its Digital ecosystem. To continue with India's Digital revolution momentum, the government has announced further reforms, including plans to boost semiconductor manufacturing, electronic manufacturing and drone Manufacturing. A few of the significant reforms that will further enhance India's Digital revolution are: