India's life sciences industry has played a crucial role in improving health outcomes in India and globally, supported by the country's inherent strengths in vaccine production, generic medicine development, and, more recently, biopharmaceutical development. India has secured a position among the top 12 biotech destinations in the world, ranking third in the Asia-Pacific region. Recent initiatives implemented by the government, coupled with the technological changes brought about by the private sector, have led to considerable development in the sector. Emerging markets such as India, have also increased the attractiveness of the industry due to the regulated prices of pharmaceuticals, wherein estimates are that about 20-40% of the Indian Pharma Market could potentially fall under price caps by 2024. The Genome Valley has played a critical part in the development of the life sciences industry.

Overview of Genome Valley
Genome Valley is India's first structured hub for life sciences R&D and clean manufacturing operations, with world-class infrastructure including Industrial/Knowledge Parks, Special Economic Zones (SEZs), multi-tenanted dry and wet laboratories, and incubation facilities. Located in Hyderabad, it is home to more than 200 enterprises, including well-known global brands such as Novartis, GlaxoSmithKline, Ferring Pharma, Chemo, DuPont, Ashland, United States Pharmacopeia, and Lonza, with a workforce of around 10,000 qualified people. The R&D hub, spanning an area of 25 square kilometres, provides synergistic potential for a diverse range of firms focusing on agri-biotech, clinical research management (CRM), biopharma, vaccine manufacturing, regulatory and testing, and other areas in the life sciences industry. With the Genome Valley catering to an estimated one-third of the demand for children’s vaccines globally, Hyderabad has emerged as India’s major life sciences cluster, ranking above Chennai and Bengaluru. Furthermore, the Genome Valley houses the nation’s largest animal resource and testing facility; the Life Science Zone houses corporations such as GlaxoSmithKline Pharmaceuticals and Dr. Reddy Labs.

The Genome Valley is home to numerous firms (from around 18 nations worldwide), including India’s three largest vaccine manufacturers – Bharat Biotech, Biological E, and Indian Immunologicals. It is considered the European hub of India as it houses major European corporations such as Novartis, Sandoz, Londa, Ferring, Chemo, and GSK. The Genome Valley includes more than 2.5 million square feet of multi-tenanted laboratory space. Of this, around 500,000 square foot space was estimated to be ready by March 2021; construction of another 1.5 million square foot site is underway.

Some globally well-known entities are located in the Genome Valley, as mentioned below.

Novartis operations in Genome Valley, which were commenced in 2010, serve as the corporate’s major R&D centre 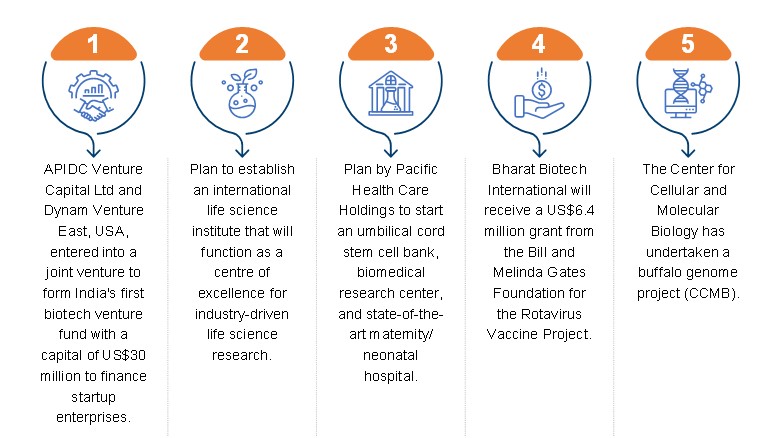 Government Initiatives
The government of Telangana in 2018 had initiated a plan that was named ‘Genome Valley 2.0’. The project was intended to be an upgraded version of the erstwhile life sciences and biotechnology cluster. It aims to evolve into an industry-led, knowledge-based ecosystem, catalyzing local economic development. The expansion would serve its purpose of gathering more global enterprises that would establish themselves in the area and thus expand their operations.

The Telangana government aims to double the valuation of the life sciences ecosystem from Rs 3.9 lakh crore (US$ 50 billion) currently to Rs. 7.8 lakh crore (US$ 100 billion), besides creating over four lakh jobs.

The government is developing Sultanpur Medical Devices Park Project with an investment of Rs. 249.9 crores (US$ 32.2 million).

A single-window mechanism has been promised in the new Industrial Policy of 2014. The Telangana State Industrial Project Approval and Self-Certification System (TS-iPASS) Act, 2014 made this possible. The Act requires all approvals and permissions to be granted within 15–30 days. It has been provided for automatic approvals based on self-certifications. The government has also introduced Right to Single Window Services for entrepreneurs.

The government offers additional support, as described below.

The government, through its various initiatives in the life sciences sector, aims to develop the infrastructure, to attract more companies. Moreover, the government plans to establish various research centres to promote development, with an objective to make the state an attractive destination for companies to invest and set up their business. Moreover, swift permits are an excellent incentive to pose as a suitable area for companies.

Promising Prospects for Life Sciences Sector
The Genome Valley has transformed the life sciences sector in Telangana and nationally. The project houses about 800 companies that have catalysed the sector. Developments in the sector have enabled Hyderabad to contribute one-third of the global vaccine output (i.e., 35% of India’s pharmaceutical production). Moreover, Telangana has emerged as the only state in the world to house 200+ USFDA-approved facilities. The government has been taking further steps such as developing Genome Valley 2.0 and securing investments during international meets such as the World Economic Forum. The government is planning to encourage 3-5 of the top 10 MNCs to set up their R&D centres, creating a solid surveillance platform, and developing the public health infrastructure to accelerate clinical research. The sector is expected to attract investments, with the government announcing its Vision 2030 initiative that aims to create 400,000 jobs, double the value of the sector to Rs. 7.8 lakh crore (US$ 100 billion) and provide support to the sector to emerge as the leading life-sciences hub in Asia.