Micro, small and medium enterprises (MSMEs) are considered the pillars of Indian economy due to their considerable contribution to GDP, exports and employment generation. MSMEs started with the establishment and growth of India's khadi and coir industry, along with various industries situated in rural areas. Most micro and small businesses belong to food and agriculture sectors. Medium-sized firms are primarily within automotive, pharmaceutical, textile and chemical industries. The MSME sector has coordinated and worked with relevant ministries, state governments and stakeholders to develop India’s rural economy. India has an estimated 633.88 lakh MSMEs, of which 324.88 lakh MSMEs are based in rural areas and 309 lakh are from urban areas. 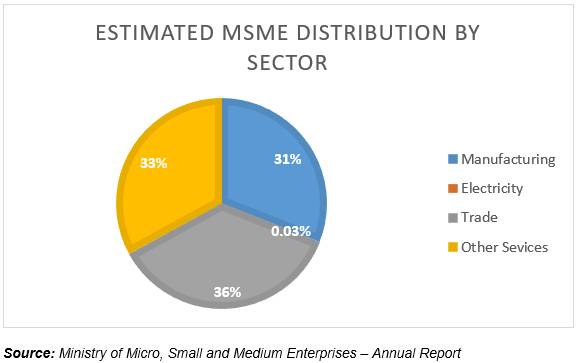 MSMEs are mainly engaged in the development, manufacturing, processing or storage of goods and commodities. They are classified based on investment and turnover, as per the following criteria.

The MSME sector in India gave a major boost to the economy. Over 63 million MSMEs spread across the country contributed 30.5% to India's GDP in FY19 and 30% in FY20. It also created many employment opportunities. Based on a study conducted by the Ministry of Statistics & PI between July 2015 and June 2016, the MSME sector employed 111 million workers. Compared with large-scale companies, MSMEs aided in the industrialisation of rural areas at minimal capital cost. The sector has made significant contributions to the country's socio-economic growth and complemented major industries as well. MSMEs account for approximately 40% of India's total exports, 6.11% of GDP from the manufacturing sector and 24.63% of GDP from the services sector. 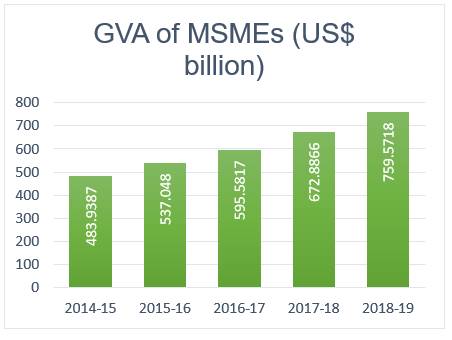 Key drivers of the MSME sector

The MSME sector is governed under the Micro, Small and Medium Enterprises Development Act, 2006. This act came into effect to facilitate and promote the sector and enhance its competitiveness. Schemes launched by the government under this act are:

The government has also launched various campaigns such as Skill India, Startup India, Digital India and Made in India to boost this sector’s growth and enhance productivity.

The MSME sector experienced massive growth over the past two decades, despite limited use of technology. It has potential to scale up via effective utilisation of technology and implementation of e-markets and digitalisation in manufacturing processes. Various steps taken by the government and MSMEs include:

Digitalisation will provide transparency across the supply chain and allow MSMEs to scale up operations.

MSMEs are key to the US$ 5 trillion Indian economy. However, for India to grow rapidly in the next decade, MSMEs must mature into large-scale corporations. India needs to triple the number of large-scale businesses, with over 1,000 mid-range businesses currently scaling up. Budget allocation for the MSME sector in FY22 more than doubled to Rs. 15,700 crores (US$ 2.14 billion) from Rs. 7,572 crores (US$1.03 billion) in FY21. Financial support from state and central governments and favourable policies can push India into becoming a high-growth manufacturing-based economy. India can meet its goal of achieving sustainable fiscal and socio-economic growth through a clear vision and concrete plans involving MSMEs.